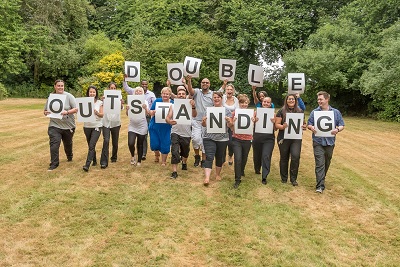 A SPECIALIST hospital supporting people with autism has received its second “Outstanding” rating.

Inspectors from the CQC reported that Wast Hills, part of the Danshell Group, provides “Outstanding” care and support for people with autism – the second time in two years the service has received this top rating.

In their report inspectors said people who used the service and their families gave “extremely positive” feedback about the “great” care they received. Families felt their loved ones had “much improved” during their time at Wast Hills, while people said they felt “safe and happy”. One person who uses the service described it as “better than a 5-star hotel”.

The report noted commissioners and other professionals were complimentary, saying Wast Hills was “responsive and flexible to individual needs, adapting the environment to suit the person”.

Inspectors found that staff understood people’s needs through having “excellent knowledge” about people and praised the “strong, positive and visible person-centred culture” where the skilled and experienced team worked “exceptionally well” together. The report noted staff received specialist training and “worked together to provide good quality care and treatment, working closely and proactively with families.”

There was praise also for innovations at Wast Hills including the creation and delivery of training for emergency service personnel and local schools on understanding autism, as well as the service’s commitment to STOMP, a national campaign to reduce the use of medication.

People using the service enjoy a wide range of meaningful activities, which are “individualised to meet their needs, encourage independence and improve their skills”, the report noted.

Inspectors said Wast Hills “sought to continually improve the quality of the service they provide” and added it was committed to quality improvement, promoting a “positive culture that supported and valued staff where staff enjoyed working with their patients.”

Chief Executive of Danshell, Mel Ramsey, said: “I am incredibly proud of the entire staff team at Wast Hills, and to achieve Outstanding for a second time is a testament to them all.

“I am delighted that the progress the people we support make while at Wast Hills has been recognised by the inspectors. The entire team always go above and beyond to create a service which is truly centred on each person’s needs”