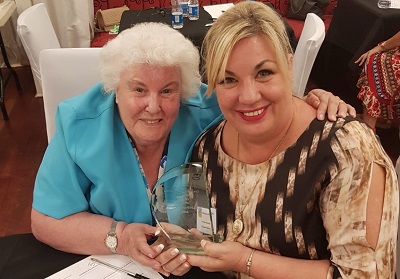 Carolyn Silcock, a Care Home Nurse, has been awarded a Bravery Award by Liverpool Ladders of Life ADHD Support Group

It was an ordinary day as Carolyn walked home from the local shops, but what happened next was no ordinary moment.  As she walked underneath the bridge she looked up and saw a young man hanging over the side, Carolyn noticed he had blood on his face.  Carolyn’s first thoughts were how to get to this man and help him. She immediately flagged a car down and asked them to ring the police. Then she ran up the side of a hill, climbed a nine foot fence and walked onto the bridge to meet him.

Carolyn constantly reassured the young man that she was there to help him and they could talk. She also took hold of his coat to prevent him harming himself any more.

The young man turned out to be a 19 year old youth and had been on the phone to his mum telling her he was going to end his life. Carolyn then spoke to mum to reassure her she was with her son and would not leave him by himself.

They talked for 1 and a half hours and by talking, Carolyn was able to get the young man to the right side of the bridge.

During this time she was able calm him down emotionally and give him reassurance that there was support out there for him.

Carolyn then went even further with her sacrificial caring, she promised to take him to weekly support groups.

Her brave act of kindness resulted in this young man and his family getting the correct support that was needed, and mum and son then journeyed together to hospital.

As recognition for Carolyn’s part in this whole event she was awarded Outstanding Bravery Award 2018 by Liverpool Ladders of Life ADHD Support Group.

The award ceremony was held at The Sylvestrian in Liverpool and Carolyn’s mum Carol Sherlock was proud to accompany her daughter.

Carolyn said “It was an honour to support this young man throughout his awful ordeal. I still keep in touch with him 2 years on and it is great to see him so well now. Sometimes people are nervous of intervening, but I would encourage us all to look after each other.”

Stocks Hall Nursing & Care Group would also like to say how proud they are of Carolyn Sherlock, Nurse at Stocks Hall, Burscough Home and are delighted she has received special recognition in this way.

Speaking on behalf of the Group Sammi Molyneux, Carolyn’s Manager said “When Carolyn told me the whole incident we were so proud of her. She truly is a guardian Angel and I am sure without her selfless act of compassion and bravery this young man’s life would have gone in a very different direction.”