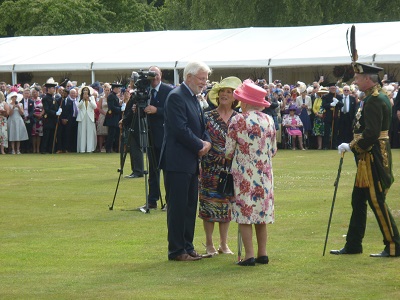 A 69-year-old retiree is elated after his ‘once in a lifetime’ meeting with The Queen at this year’s Garden Party in Edinburgh.

Held on Wednesday 4th July at the Palace of Holyroodhouse, John Stockan, a former chartered surveyor, and his wife, Jan, dressed in their Sunday finest as they attended the annual summer event.

The couple, who live at Bield’s St Andrew’s View in Bearsden, were invited on account of John’s many years of charitable work and his position within the Orkney community, which includes, amongst others, his roles as a Trustee of the St Magnus Way Pilgrimage Route, Member of the Council of the Friends of St Magnus Cathedral and Board Member of The Pier Arts Centre.

John said: “We got the train through from Glasgow and then walked from the station. There were loads of people in their finery walking down to Holyrood at the same time.

“We had afternoon tea and mingled until 4pm, and then The Queen entered and ‘God Save the Queen’ was played.

“We started speaking to members of the Royal Company of Archers (the Queen’s Body Guards in Scotland) who enquired about our reasons for being invited and their senior member asked if we would like to come into the main area and meet the Queen.

“We were completely shocked but very honoured to have been chosen.

“We spoke to the Duke of Buccleuch first, who then passed on our names to The Queen. We spoke about St Magnus Cathedral in Kirkwall, which she remembered as that lovely pink sandstone building, and also about the impact of tourism on Orkney.

“The meeting was such an unexpected addition to what was a once in a lifetime day.”

Every year The Queen welcomes more than 30,000 guests to spend a summer afternoon at either Buckingham Palace or the Palace of Holyroodhouse.

Those from all different walks of life and areas of the country are invited to meet The Queen and The Duke of Edinburgh, while enjoying a spread of sandwiches and cakes in the royal gardens.

Bield has been providing high quality housing and related services in Scotland for more than 40 years, allowing older people to enjoy life and live independently.