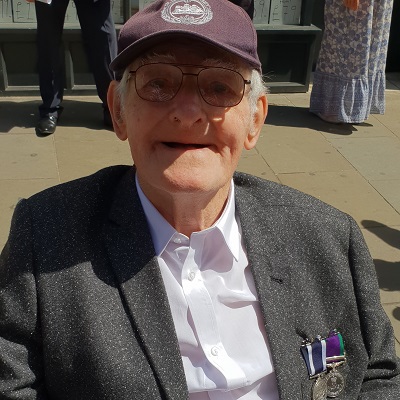 A former Naval Officer has thanked staff at a care home in Newark-on-Trent for giving him the opportunity to attend the first Armed Forces Day Parade at Newark Market Place.  George Davis, known as Bill, spent a memorable afternoon joining in with the parade in the glorious sunshine with fellow residents and veterans.

Bill has lived at Bowbridge Court for just over a year and Lifestyle Manager, Rachel Williams-Byers, made sure that he and other residents were able to attend the special day and take part in the parade.  They watched the marching procession of military associations, cadets and military vehicles followed by the raising of the Union Jack and a salute to a senior serving officer who addressed the audience with a summary of current and historic army activity.

Rachel said, “The Armed Forces were such a big part of our residents’ lives, especially for Bill, so when I heard about the parade this year I knew we had to go along.  It was a heart-warming and emotional sight when Bill joined in with other veterans for the parade – we are all extremely proud of him.”

The parade was an unforgettable moment for Bill, who wore his medals with pride, and saluted the passing soldiers.  Bill said, “I am very proud of my time in the Navy, and I’m very happy that I get to take part in things that are important to me.  It was a marvellous day and I thoroughly enjoyed it and appreciate all that everyone does for me here at Bowbridge Court.”

Bill, who is now 86 years old, joined the Royal Navy in 1947 when he was just 15.  He boarded training ship, HMS Ganges, as a boy seaman and went on to serve on submarine depot ship, HMS Montclare.  Bill became a submariner in the early 1950’s with his speciality being torpedoes.

During his 25 year service career, Bill was posted to many different places and he fondly remembers the Persian Gulf, Malta and Singapore.  He served during the Iceland Cold War and he was Captain of the Quarterdeck for the burial at sea of Lady Mountbatten, aboard HMS Wakeful off the coast of Portsmouth in February 1960.   Bill was even involved in the planning team for Winston Churchill’s funeral in 1965 – one of the largest state funerals of that time.

After completing service, Bill joined the Naval careers office where he worked as an instructor back at HMS Ganges for many years, helping to train the new recruits and passing on his many years of experience and wisdom.

Bill’s daughter, Sandra Marelli, said, “I am very proud of all my father’s achievements.  The parade was a wonderful moment for my whole family and I am grateful that dad still has the chance to attend these kinds of events.”