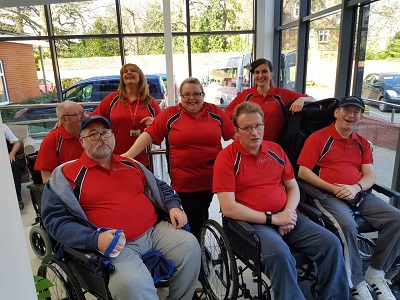 Over the last year residents at Kings Lodge Centre for Complex Needs in South Nutfield, Surrey, have been training hard. Not only in physio or therapy sessions, but on the sports field. The King’s Lodge Boccia team has played over one hundred games since it started a year ago, training every week on site and at the local YMCA centre.

It all began when a resident began attending training at the YMCA. He enjoyed it so much that he invited others at the centre to join in, and soon they had a team of six.

Described by Boccia England as ‘a tactical target sport’, Boccia requires both muscle strength, accuracy and precision, making it an ideal sport for people in recovery. ‘Those taking part at Kings Lodge have seen big improvements in power and flexibility. It helps physically, cognitively, and is great fun,’ says Jane Neave, Activities Manager at Kings Lodge.

The team recently took part in a regional tournament in Staines, competing against 15 other teams in back to back games for six hours. They didn’t make it to the next stage, ‘but we had good fun trying’ says Jane.

Some of the value of the sport comes from being part of a team and socialising with others, and there’s a real sense of camaraderie in the team. Fully inclusive, the equipment needed can be adapted so that anyone can play. Players can throw, kick or roll the balls on to the court, depending on what works for them.

Such is the centre’s commitment to the sport, that Katerina ‘Kitty’ Stojanovic, an activity assistant, has attended training to coach Boccia, and is working towards her Gold certificate.

Having such a beneficial and enjoyable activity on the timetable is evidence of Kings Lodge’s dedication to providing good quality and holistic care that has the patient’s long-term wellbeing at its core.

Covid-19 vaccine- it’s only a little needle, nothing to worry about, say care home resident