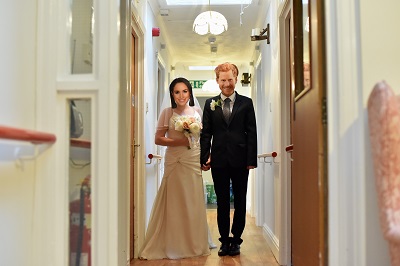 Residents at a South Wales care home will be clinking champagne flutes with senior royals as they host their own royal wedding in honour of Prince Harry and Meghan.

Treetops Residential Home in Bridgend, a member of care champions Care Forum Wales, will be holding a lavish wedding ceremony on May 19th in celebration of the royal couple’s big day.

And to make it as authentic as possible they’ve invited some very special guests.

Her Majesty The Queen, Camilla Parker-Bowles, Prince William and Prince Charles will be just some of the VIPs sipping champagne at the ceremony – courtesy of face masks and wigs worn by residents and staff.

They’ve even enlisted their very own florist for the occasion to create a floral “wedding arch”, ordered a traditional tiered wedding cake, purchased ginger wigs in tribute to the royal prince and organised a sumptuous “street party-style” wedding breakfast after the official ceremony.

Care staff are so keen for residents to feel part of the royal couple’s special day they’ve even borrowed a wedding dress and groom’s suit, which will be adorned by carers Sophie Davis and Katie Hopkins, who will play Harry and Meghan on the day and will “exchange vows” at the same time as the royal couple.

Meanwhile, local volunteer Jeff Davies, who usually makes an appearance as Santa at the home, will be dressing up as Prince Philip for the royal occasion.

He said: “It takes a lot of effort to organise events of this scale but the impact is truly amazing and will give residents something to talk about for many years to come. 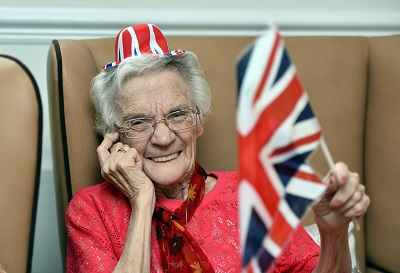 “Person-centred care is all about positive interaction and encouraging people to enjoy the things they love through memorable experiences. A Royal Wedding Party is the icing on the cake and will really help bring this historic occasion to life.”

Anne Pope, deputy manager of the home who is doubling up as wedding planner for the event, said the royal party would be fit for a prince or princess.

“We never do anything by halves here and this is certainly one of those memorable events,” said the 56-year-old, from Bridgend, who has worked at Treetops for almost 30 years.

“We’re always trying to surprise the residents and nothing is too much trouble. This year Santa arrived on top of a ride-on camel which shows how daft we all are. We love seeing their faces light up.

“The residents really enjoy it when we bring these kinds of events to life. They never really know what’s going to happen next and I think that’s nice. It brings them out of themselves and encourages them to get involved.

“Most of the residents love the royal family and so we want to make them feel a part of it and give them special memories. A lot of the residents remember the street parties that were held to mark other royal weddings like Charles and Diana. It has become a real talking point already and once we hold our own wedding they will be chatting about it for many months to come.”

On the big day, Treetops’ main lounge will be transformed into a party venue with photos of the royal couple, Union Jack flags and balloons pinned to the walls while floral pews will line the aisle up to the flowered archway.

Residents will be encouraged to mingle with the royal guests while sipping a glass of champagne before enjoying the live wedding ceremony, courtesy of three television screens.

Margaret Vaughan, 88, originally from Aberkenfig, said: “I really enjoyed watching the royal wedding of Charles and Diana on the television when I lived at home.  I’m very pleased that Prince Harry has found someone to marry, and I am looking forward to watching and celebrating the wedding.”

Grandmother-of-five Hannah Thomas, 85, from Pontycymmer, has already picked out an outfit to wear to the royal occasion.

“I remember watching Princess Diana getting married on the television with my family which we all enjoyed,” she said.

“She looked like a fairy princess.  I’m looking forward to celebrating this wedding at Treetops with my friends.”

Veronica Evans, 86, from Maesteg, who has two grandchildren, added: “When Charles and Diana got married we all set up tables in the street with food made by all of the neighbours.

“It was a lovely day to celebrate their wedding.  I am very much looking forward to watching the next royal wedding with my friends at Treetops.”

It’s not the first time the care home has decked out its walls in red, white and blue.

“When it was the Queen’s 90th birthday, everybody thought they were just going to watch it on the TV but we covered the outside with Union Jacks and held a street party,” said Anne.

“This time it’s like we’re hosting a real wedding. Once you start you can’t stop and only the best will do!

“One of the girls got married a few years ago and is bringing in her dress along with the veil and tiara. Every member of the Royal Family will be there courtesy of our special face masks. We’re really bringing it to life.

“I have a great job and I like to get it right. It’s full on but on the day you can look back and feel very pleased with yourself. It’s well worth the effort.”

The Queen is Teresa Newman, Carer