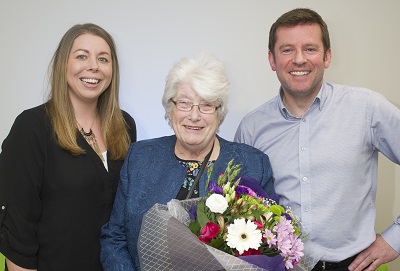 A well-known charity volunteer and Northumberland care worker has stepped down from her role and retired, after almost 25 years of service.

Mary, 74, from Hexham, celebrated her long length of service surrounded by her colleagues who organised an afternoon tea for her on April 25.

Nicola Taylor, branch manager for West Northumberland, said: “Mary has been a highly valued colleague and a friend to many while she has worked for Helping Hands, so I really wanted to organise something special before she left us to enjoy her retirement.

“Not only has she made an impact on the staff she worked with but our service users and their families as well. Mary has always been a very selfless person, who was always willing to go the extra mile to help others, which made her a great homecarer. After all these years with us, she deserves some well-earned time to herself.”

Dozens of colleagues paid tribute to Mary, with one colleague dubbing her as ‘’Mrs Helping Hands’’ and describing her as an inspiration.

Alongside her role as a homecarer, Mary has also been a key part of her community. She was awarded an MBE in 2012 for her services to the Red Cross, after volunteering for more than 1,000 hours a year.

Mary said: “I have really enjoyed working for Helping Hands over the years, I have met so many different people and I will miss working with all my colleagues, but I am also very much looking forward to my retirement.”