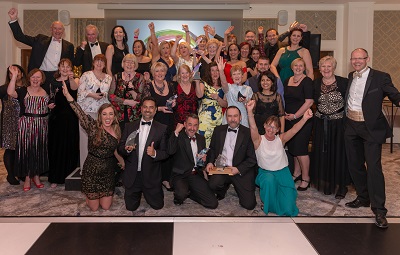 are home staff from across the south are toasting success after a glittering awards night in Bournemouth.

Thirty-three finalists, representing 18 of Colten’s 20 homes plus its Ringwood head office and sister company Colten Developments, were hoping for success on the night.

Among the special guests was Tom Storey, a resident at Canford Chase in Poole, who presented the Resident Engagement Award to Healthcare Assistant Katie Laing, employed at Whitecliffe House in Blandford.

Her citation summary read: “Katie was chosen by the judges as she clearly takes her role above and beyond for the benefit and support of residents.”

Mark said: “We enjoyed a spectacular night and it was fabulous to see all the winners being cheered as they collected their trophies.

“We are an organisation full of successful people who are worthy of awards.

“It was such an honour to be among so many colleagues who truly embody our core values of being friendly, kind, individual, reassuring and honest.

“We’re already looking forward to next year, more award submissions and the chance to welcome more of our talented people to the red carpet once again.”

Hilary Jones said: “This was a celebration of all the little things that everybody does, no matter what their role is, in a collective effort to care for residents and their families.

“They do a great job. Tonight they have been rewarded for it and it’s been a privilege for me to be part of it.”

Braemar Lodge in Salisbury won the Home Team of the Year award, with gardener Lesley King picking up the Pride in Your Home award.

Home Manager Alison Bremner said: “We had a fantastic night. Our team have become just like a big family over the years and it’s wonderful to have our work recognised by residents, relatives and visitors.”

Colten Care has more than 1,000 residents across the 20 care homes it owns and runs in Hampshire, Dorset, Wiltshire and Sussex.

All are registered for nursing care and there are four dedicated dementia care homes.

The ‘completed set’ of 20 inspection reports means that all Colten homes are officially rated either Outstanding or Good against a CQC average of 74%.