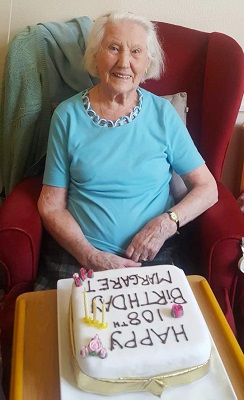 On 20th April Margaret Reed celebrated her 108th Birthday with a wonderful birthday cake, card from Her Majesty the Queen and party at Priory Court Care Home in Burnham-on-Sea. Margaret was also treated to lunch out with her family at the Tudor Hotel and Restaurant in Brigdwater.

Born on 20th April 1910 in Ireland, Margaret was one of nine children. During World War II she was part of the Royal Air Force AT Farnborough, where she served in a secret establishment. After she married she moved to Cornwall and has one child named David, she has lived at Priory Court Care Home since 2015.

Margaret is a very independent lady and an active part of the community in Burnham-on-Sea, she still attends Roman Catholic Mass once a week.

“Margaret is an amazing lady and a wonderful part of our family here at Priory Court, all the staff and residents would like to wish her a very happy 108th Birthday”. Said Raji Sunil Home Manager at Priory Court Care & Nursing Home. “Margaret had a great day and it was a pleasure to celebrate this milestone with her.”