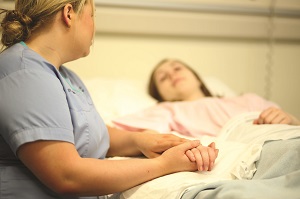 Care home staff have come out in force to highlight the top reasons to pursue a career in older people’s nursing. Respondents have celebrated the profession for its clinical practice and progression opportunities, fighting back against false impressions within the industry.

The Care to Care survey was run by Bupa in partnership with the Royal College of Nursing (RCN), to support nurses and address the common misconceptions of care home nursing.

Highlighting the opportunity for older people’s nurses to build meaningful relationships with those they care for, 81% of those surveyed also said they chose the profession in order to be able to provide continuity of care.

Helen Baxendale, Lead Nurse for Bupa Care Homes commented: “I never considered a career working with older people but got into it by chance after finishing my nursing training. That was 28 years ago and I haven’t looked back! It’s allowed me to build up meaningful relationships with residents and their families, as well as being able to put my clinical and leadership skills to good use in a variety of challenging ways.

“Over the years I’ve worked in and managed care homes, and now I work in the central quality and compliance team, helping to ensure all our home managers and their staff are supporting our residents to live meaningful lives’ in care homes that deliver great quality care. The roles I have undertaken have been really varied, but I’ve found great support throughout my career and have been able to develop a career that’s perfect for me.”

However the study also uncovered misconceptions about care home nursing within the wider nursing community, with a negative stigma meaning it is often perceived as a less clinical area. While eight out of ten (79%) respondents based in care homes agreed that older people’s care nurses developed a broad skill-set, less than half (48%) of nurses outside of the setting felt this would be the case.

Joan Elliott, Managing Director for Bupa Care Homes said: “It’s great to see nurses acknowledge the variety of clinical and personal skills involved in working with older people, and it’s vital that we dispel the misconception that these roles are less clinical or slower-paced. As the research shows, older people’s care nursing can be a hugely rewarding career, and I hope this encourages more people to consider it.”

Dawne Garrett, Professional Lead for the Care of Older People and Dementia at the RCN added: “With the population getting older, older people’s care nursing is becoming more important than ever before and it’s vital that we’re attracting the right people to the role. These findings will inspire current nurses, and those new to the profession to consider a career in the field. It is a flexible, varied and above all highly rewarding career, empowering individuals to make a tangible difference to the lives of older people.”

In addition to exploring the reasons behind their career choices, the study also found that nurses in older people’s care are being well supported with relevant training. Nine out of ten (88%) agreed they had sufficient training to carry out areas of relevant clinical practice, with an overwhelming 92% of respondents saying they were confident in doing so.

86% of respondents also said they had the skills and training to carry out non-clinical areas of resident well-being, with 94% confident in their ability to practice these.