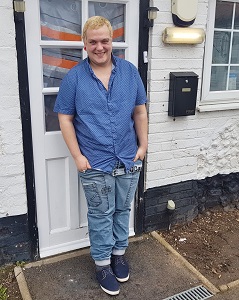 A young man with learning difficulties is enjoying a new lease of life after moving to a supported living service near King’s Lynn.

Since Mark Lowman – who is 27 and has learning difficulties – relocated from a service on the opposite side of town in February, he is ‘a different man’ according to senior support worker Danielle Garrigan.

“Mark was very keen to be living closer to his mum,” said Danielle. “His previous home was 20 miles away, whereas now she’s just around the corner, so that’s a big part of why he’s happier, but that’s not the only reason.

“We’ve given him a lot of personal support and he has settled in quickly at Sail Close, where he’s developing new skills including a much better understanding of how to manage his money.”

Budgeting was something Mark had previously struggled with, but the Regard Group – who run Sail Close – has identified money-management as a key area in supporting people to develop independent living skills, and Danielle has been working closely with Mark to help him focus his growing financial acumen.

Danielle Garrigan said: “In the past Mark would often discover that he’d used up his weekly allowance before he got to the weekend, but he now understands how to follow a weekly budget plan.”

He is supported to revise this plan weekly by his key worker, Lesley Bradnam, according to the activities he plans to do that week.

“Mark likes variety in the things he does from week to week, so staying on top of his cash-flow is critical,” said Danielle. “He now budgets his money and, for example, limits himself to one takeaway per week.

“Last week he has actually managed to save some money so that he could go out and buy an e-cigarette because he wants to quit smoking.

“My colleagues and I are supporting him to make other changes in his life as well. One of these is to support him to do his shopping at the local supermarket, instead of relying on online shopping. This enables him to make better informed shopping decisions, and also gives him the opportunity to interact with other members of the community.

“As a result, with our support, he is now cooking well-balanced meals from scratch, and he’s also looking after his flat very well and generally doing fantastically.

“He recently told me that he’s really very happy now, which was great to hear because he’s not the sort of person who is inclined to say things like that very often.”

Because one of the things Mark used to enjoy at his previous placement was a regular dog-walking job at a local rescue home, he is also currently being supported to contact the local RSPCA to explore the possibility of a dog-walking placement in his new locality.

Danielle has established a good relationship with Mark’s mother so communications between home and Sail Close are easy, and because they’re living closer now they can see each other as often as they like, something they both enjoy very much.