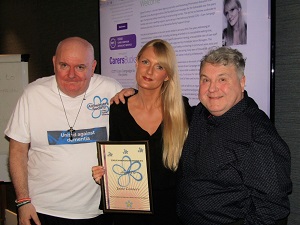 Inspirational dementia champion Terry Eccott has become an Ambassador for Care Campaign for the Vulnerable.

Care Campaign for the Vulnerable was founded six years ago by Jayne Connery, following her mother’s experiences in the care sector. It now has more than 55,000 supporters on social media, with many sharing their own experiences of family members’ inadequate care.

It is due to the overwhelming support that the organisation is now able to offer a new advocacy service.  This will offer support and advice for families and carers who have been affected by inadequate care for their loved ones as well as volunteer advocates who are available to speak up on the behalf of the families.

Terry, who is also an official Ambassador for the Alzheimer’s Society, was introduced as an Ambassador at an event held at the Crown Plaza Hotel in Gerrards Cross, which was supported by Care Protect and attended by care professionals and advocates including TV personality Russell Grant.

At the event Terry also presented Jayne with a personal Dementia Ambassador award.

Jayne Connery said:  “Many people are described as inspiring, but Terry truly is.   His work highlighting the challenges of living with dementia and fighting for better care and more funding for the sector is vitally important.

“When he contacted me to learn more about our important work and then agreed to be an ambassador it was humbling.

“Care Campaign for the Vulnerable was started to champion safety monitoring in communal areas in care and nursing homes for peace of mind for both vulnerable residents and their families and carers.

“My main aim now is for everyone to work together; care providers, care professionals, families and care workers to tackle one of the biggest challenges we face as a society, caring for those who can no longer care for themselves.

“Dementia is now overtaking cancer and heart disease as the biggest killer in the UK but families and carers tell me that the support and understanding for people living with dementia is far less and the financial stress far greater.

“There is much more to be done and through our work we will keep pushing to promote mandatory safety monitoring into the care sector, and provide support to families and carers finding their way around a system that is currently failing many vulnerable residents, families and carers.”

Terry Eccott said:  “Jayne’s voice is very important within the care sector and something I am proud to support.   As the population ages there are going to be more and more people needing care and support and it’s up to us all to fight for a care system that really does care.”

Russell Grant added:  “As a Patron of Alzheimer’s Research UK the fantastic work Jayne is doing is so needed and necessary to support those who are vulnerable until we secure a cure”.