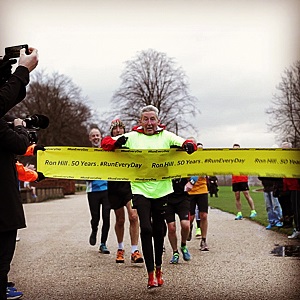 Running legend Ron Hill says he is ready to face “the biggest challenge of my life” after revealing that he is now living with dementia.

The 79-year-old marathon icon has vowed not to let dementia “get me down” and fight the condition with the same determination that turned him into one of the world’s greatest ever long-distance runners.

Ron, a former Commonwealth and European champion who was once the world’s top marathon runner, will call on willpower and vast reserves of energy to inspire other people who are living with dementia.

“Dementia is the biggest challenge of my life but it isn’t the end of the road by any stretch of the imagination,” Ron said.

“I can’t be ashamed of it because I haven’t done anything to deserve it. No one does. It’s there and I can’t rub it better or run it off like a minor niggle – or get better with rest or physiotherapy like I would with a running injury.

“It won’t stop me in my tracks, so to speak. I don’t wake up feeling sad or anything like that. I sleep like a baby.

“So I’ll cheerfully carry on keeping active and, hopefully, this will give other people the impression that dementia is nothing to be frightened by and that there shouldn’t be any stigma attached to it.”

Ron, who lives in Hyde, Greater Manchester with wife May, recently headed to his GP practice for tests when one of his two sons, Steven, suspected his dad was developing short-term memory problems, which can be a symptom of dementia.

“I was effectively diagnosed with Alzheimer’s disease, dementia or whatever you want to call it, with a short-lived test,” said Ron, who is now waiting for a formal diagnosis.

“I had to read an address and then when I was asked to repeat it I had no idea – it all just went away. That’s when the penny dropped.

“It’s got to the point where my short-term memories quickly vanish and I have to ask my wife what day of the week it is when I wake up in the morning. But I’m not daunted and I’m not embarrassed to say that I’ve got a problem.

“I’m lucky that I’ve got a lovely family and great friends and fortunately I can still vividly re-call the days when I was in my running pomp and those memories always bring a smile to my face.”

Ron represented Great Britain at three Olympics and was the first Briton to win the Boston Marathon. He won gold in the 1970 Commonwealth Games in Edinburgh in a then world-record time of two hours nine minutes and 28 seconds.

Ron, who set up his own sportswear business, also had an astonishing 52-year streak of running at least one mile every day which began in December 1964 and ended last year when he suffered chest pains while out on a daily jog.

“I don’t seem to remember anything short-term but I’ve got a feast of memories I can still get to and they can make me feel better,” Ron said.

“I remember enough about my running career to be able to talk logically about that.

“I will cope with dementia to the very best of my ability and I’ve been reading up on what I need to do.

“Whatever happens, it won’t get me down and it won’t stop me from being happy or living life to the full. It won’t stop me getting out and about or going away on holiday.

“It’s a blow but I’m handling it fine already. I certainly won’t start feeling sorry for myself. What’s the point? That would get me absolutely nowhere.

“But if I say I have developed dementia and I’m happy with it, then hopefully other people will lead my take my lead and realise it’s not a death sentence after all.”

Ron’s wife of 56 years, May, added: “It’s just so sad because Ron’s as fit as a fiddle and he’s the last person you would expect to develop dementia.

“It just shows that dementia doesn’t care who you are – but it won’t stop us being happy and I know we’ll deal with whatever it throws at us, together as a team with family and friends.”

Ron will be the guest of honour at the OMC Motor Group Ron Hill Accrington 10k & Fun Run which has had to be postponed from this weekend due to the weather and will now take place on Sunday, April 22.

It will see money donated to Alzheimer’s Society, the UK’s leading dementia charity, which works tirelessly to challenge perceptions, fund research to find a cure and improve care and support for those affected.

The event, in the Lancashire town where Ron grew up, is being organised by Cannonball Events whose founder, John Lloyd, made the decision to boost the charity’s funds after learning of Ron’s dementia.

“Being a Lancashire lad I’ve always revered Ron and over the last few years it’s been an honour to organise the race in his name and get to know him.

“When he told me about his dementia I was taken aback but his attitude has been amazing because, like running, he’s approaching this without fear.

“In the same breath he told me about his dementia, he said ‘this will not beat me’ and ‘I’ll use this to spur me on to get back running, continue meeting people and inspire in a different way’. I sat there in the chair in awe. I thought, ‘wow – a true legend’.”

“Ron is a true icon who has inspired tens of thousands of runners to push themselves and go the extra mile and I am sure that his grit, determination and fearless approach will now inspire people who are affected by dementia.

“Dementia is the biggest health challenge facing society and no one should have to face it alone. But Ron is showing that people with dementia can be empowered to live a life they love after a diagnosis with the support of family, friends and people across our communities uniting against dementia.”

For details about the OMC Motor Group Ron Hill Accrington 10k & Fun Run go to http://cannonballevents.co.uk/omc-ron-hill/ and for Alzheimer’s Society support visit alzheimers.org.uk or call the National Dementia Helpline on 0300 222 1122.