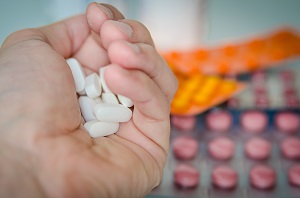 This area has been explored widely, with clinical trials so far finding no evidence to support the idea that such medication could prevent dementia.

Dr Doug Brown, Chief Policy and Research Officer at Alzheimer’s Society, said: “With no way to slow down or cure dementia, finding a way to prevent the condition is one of the holy grails of dementia research.

“Population studies, which gather large amounts of information from medical records from thousands of people, have thrown up an idea that taking ibuprofen and other over-the-counter anti-inflammatories might be linked to a lower risk of dementia. But results of clinical trials with these drugs have been disappointing so far. The researchers’ suggestion in this paper that taking a daily anti-inflammatory drug as soon as a positive result for dementia risk is shown by a saliva test is premature, based on the evidence at the moment.

“Long-term use of anti-inflammatories runs an increased risk of stomach ulcers and intestinal bleeding, and can have harmful interactions with other medications like Warfarin. We always recommend talking to your doctor before changing your medication.”