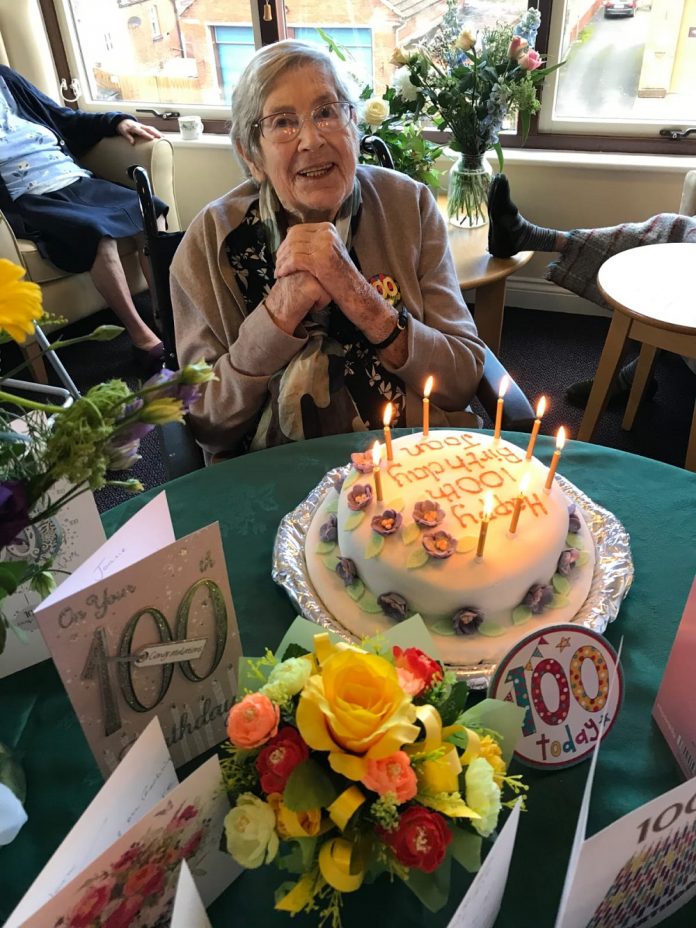 A Ledbury resident with a storied international life – which included fleeing the Suez Crisis – has celebrated her 100th birthday at a local care home.

Joan Randolph was joined by residents and staff for the celebrations at Ledbury Nursing Home, which involved a tea party and lots of video messages from family members, as well as the customary card from the Queen.

Born in Asansol, India, to British parents, Joan moved to England when she was just eight after embarking on a six-week boat journey. In her late teens she moved to Lausanne in Switzerland to study at a finishing school, before going to London Art School.

After completing her education Joan then went back “home” to India where she met her first husband, Jack Alexandroff, whom she married in New Delhi in 1941.

The couple were posted to London during World War Two where Joan worked as a cartographer, followed by a posting for her husband in Alexandria, Egypt. They lived there until the 1956 Suez Crisis forced them to flee back to England for their own safety.

A subsequent breakdown in her marriage saw Joan move to Oxford to be closer to her extended family. She worked for the university and met Julian, a mature student, who together had her only child, Juliet. She later moved to Ledbury in 1969 – marrying local man Dick Randolph – staying in the town ever since.

Joan’s Daughter, Juliet, commented: “I am sad that I can’t be with my mother on her big day, but I have managed to get video messages from all 24 family members, which I hope she will enjoy watching while she is celebrating with her friends at the home.”

A talented seamstress, Joan is also a keen gardener and music-lover. Until recent years, Joan was still volunteering at St Michael’s Hospice in Ledbury.

Hayley Attwood, manager at the home operated by Shaw healthcare, said: “Joan has lived a fascinating life and we are always keen to spend time listening to her as she recounts her youth. She is a close friend to all of us at Ledbury Nursing Home and we’re delighted that we were able to put on a party for her, even if the current restrictions meant it wasn’t how her family might have planned it.

“Joan, alongside all our other residents in Ledbury Nursing Home, has already received her first COVID-19 vaccine jab (in her typical high spirits, no less) and we’re hoping that the ongoing inoculation rollout means that we can celebrate her 101st birthday in person.”