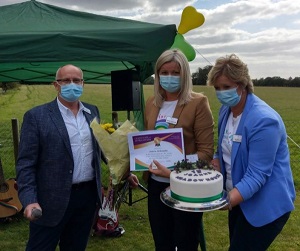 The manager of Meadow House nursing home in Swaffham has been surprised with a celebratory afternoon to mark her 15 years’ of service at the home.

Joanna`s talents were recognised and when the position of Regional Support Worker became available and she was asked to apply. Joanna then left the home in 2016 to assist the Regional Director in this role, until a year later when the position of Home Manager became available at Meadow House. Joanna applied as she had missed the home and took on the role from 2017 to the present day.

Meadow House, which is part of the Healthcare Homes Group, is rated as ‘outstanding’ by the Care Quality Commission, and provides specialised residential and nursing care to up to 38 people, most of whom have complex physical disabilities.

On Thursday 10th September, home administrator, Caroline Cryan arranged an afternoon party as a surprise for Joanna.  A special cake was made, and Healthcare Homes Group CEO Gordon Cochrane visited the home to present Joanna with her long service badge, certificate and gifts.  Residents thoroughly enjoyed celebrating with Joanna throughout the afternoon, with the bar open and music performed by local entertainer Chris Wilson.

Joanna said, “I had no idea what was being planned and was very intrigued as to why Gordon was making a special visit to see us, so I was thrilled by the effort that went into marking my long service.

“I often speak of ‘the Meadow House family’ and I honestly see my role here as being far more than a job.  I’m proud and privileged to work here with our wonderful residents and team and I look forward to many more years with them.”

Healthcare Homes Group CEO, Gordon Cochrane confirmed: “It was a pleasure to spend the afternoon at Meadow House, marking this wonderful milestone for Joanna.

“Meadow House is a true industry leader when it comes to specialist nursing care and this is in no small part due to Joanna’s fantastic leadership.

“Along with her team, Joanna goes above and beyond to support her residents, and the positive atmosphere throughout the home is testament to the fantastic culture she creates.

“I’d like to personally thank Joanna for her years of service to Meadow House; we’re all incredibly grateful for the difference and impact she makes.”