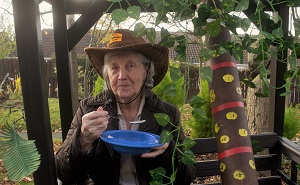 Residents at Appleby care home have competed in their very own version of ‘I’m a Celebrity, Get Me Out Of Here’ bushtucker trials, in a bid to be crowned King or Queen of the jungle, in anticipation of the series’ return to our screens.

Residents took part in nail-biting ‘bushtucker trials’, whilst competing to win ‘dingo dollars’, which could be traded in for their choice of delicious treats. Unlike the TV hit, there wasn’t a camel’s toe or a fish eye in sight. Instead, residents were challenged to blind taste tests*.

Staff at the home also embraced the theme and dressed in signature ‘Aussie hats’, as they turned the care home into a rainforest, complete with fake creepy crawlies.

Contestants at Appleby’s bushtucker trials were so good, the home simply couldn’t pick just one winner. Audrey Casey, 85, was crowned Queen of the Jungle and James Hogarth, 94, was crowned King of the Jungle. Both residents stole the show, following in the footsteps of celebrity winners including Scarlett Moffatt, Joe Swash and Harry Redknapp.

Audrey Casey, Queen of the Jungle, said: “Taking part in our very own bushtucker trials was so much fun, we’ve not done anything like that before! Everyone had a great time, and even those of us who hadn’t seen I’m a Celebrity before still took part.

“The staff are always thinking of creative ways to keep us all smiling and they did a great job making the home look just like a jungle, though I’m glad there wasn’t any real creepy crawlies!”

Clare Leonard, home manager at Appleby care home, said: “I’m a Celebrity, Get Me Out Of Here is such a well known show, and we often watch it together here at Appleby care home. The residents were such great sports and it was great to see everyone getting into the Aussie spirit!”

*dietary requirements were taken into consideration