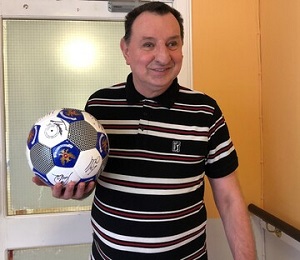 A student nurse has delighted a resident at Muirton House in Blairgowrie after organising a surprise delivery from his favourite football club.

Stuart McGregor, who is a lifelong St Johnstone fan, was gifted a signed ball and personalised gift set from his boyhood club after being contacted by one of Stuart’s carers at Muirton House.

The signed ball features signatures from a number of Stuart’s favourite players, including Jason Kerr, Scott Tanser and Stevie May, while his gift set includes a brand-new St Johnstone water bottle and wallet.

The gifts were organised by Becky McGregor, a student nurse who works at the home on Essendy Road, as a way of saying thank you to Stuart for being so friendly and welcoming to her during her time at the home. Staff at Muirton House are also hopeful of organising a visit from some of the St Johnstone players in the future when visiting restrictions allow.

Upon receiving the gifts, Stuart said: “I can’t believe that the club has sent me these personalised gifts. The St Johnstone players have been my heroes since I was a boy.”

Becky, who organised his gift, said: “It became clear almost instantly that Stuart is a huge Saints fan. He is always following the games and talks about the club very passionately.

“He is an amazing character with a great sense of humour, and I thought the gifts would be a nice way to say thank you to Stuart for being so kind and welcoming to me during our time together at Muirton House.”

Muirton House is part of Larchwood Care and is currently managed by Healthcare Management Solutions.