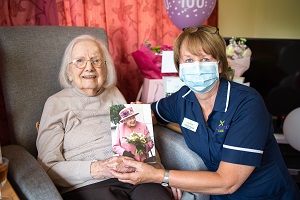 Margaret McGregor has lived at the home on Perth Road for the past two years, and staff at the home treated her to a party with fellow residents and two bagpipers serenaded them from outside the home.

Margaret was born in Wimbledon in 1920 and at the start of the war, she walked five miles a day to her job as a clerk for the Co-op, navigating through streets of bombed-out buildings destroyed by the Blitz, not knowing if her family home would be intact when she returned.

Called up in October 1942, Margaret joined the ATS where she was trained in the use of radar to track enemy aircraft and served at different army bases around the UK. She met her husband while he was serving in the Royal Navy, and after the war, the couple returned to his native Glasgow where they had two children.

Despite the restriction on visitors to Muirton House, staff and residents helped Margaret to celebrate in style, with cards and gifts sent by well-wishers, including Her Majesty the Queen.

Margaret McGregor said: “I had a wonderful day and was made to feel very special by the staff.”

Catherine Russell, home manager at Muirton House, said: “Margaret is a wonderful character, with fascinating stories to tell about her life during the war.

“Although her birthday party wasn’t what she is used to, I hope she had a lovely day nonetheless and we will make up for it when we can welcome her family to the home again.”