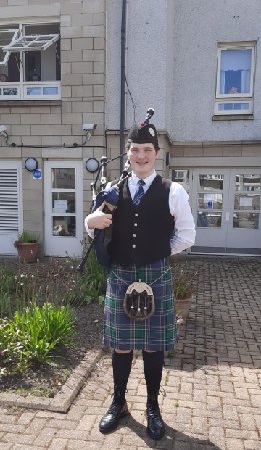 A YOUNG bagpiper has delighted customers at a housing development by playing a special ‘outdoors’ lockdown concert.

Euan Crawford, 18, from Linlithgow Academy, played in the gardens while residents at Bield’s West Port development in Linlithgow watched on from their windows.

Euan, who plays for the West Lothian Pipe Band and was in full Highland dress for the occasion, was also captured on video which is now being shared among other Bield developments.

The performance was arranged by Carol Owen of the Linlithgow Link Voluntary Group as part of a Tuesday Club collaboration which is held weekly at the West Port development.

Carol Owen said: “I could tell the customers were getting down and deflated due to the lockdown restrictions.

“I wanted to try to do something that they could look forward to. Thankfully one of the participants in the Tuesday Group has a grandson who plays the bagpipes and agreed to come down and play tune for them.

“Euan was fantastic, and the customers were all as high as a kite. They all had great big smiles on their faces, and it has given them each something to talk about with their families.

“They were all over the moon.”

The acts of kindness from pipers such as Euan have delighted many at the Bield developments throughout the Covid-19 pandemic.

Lynne Douglas, Chief Executive of Bield, said: “We are always grateful to volunteers who take their time to entertain our customers.

“Euan’s performance was excellent and had our customers humming along to his pipes. We are always delighted to have young people engaging with our customers.

“It’s little acts of kindness like this that are really bringing communities across Scotland together during a troubling time.

“Again thank you very much to Euan and Linlithgow Link for putting this on.”

This act of kindness follows a community group who have distributed nutritional meals to customers during the pandemic.

Ladies of the Rock have been serving up soup and snacks to customers at the Bield development, Greenacre Court in Bannockburn.

The group have been donating their time every Tuesday for the last eight weeks.