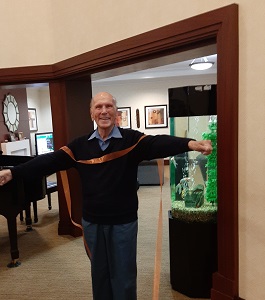 Donald Baird is a 95-year-old resident at Sunrise of Hale Barns, where he has lived for two years.

When the UK Government announced a nationwide lockdown, Donald was unable to go into the local village for his walk as he normally would. He began instead doing laps of the gardens at the care home to stay active.

As Donald was remaining incredibly active, the Sunrise team suggested he does his daily walk to raise money for the NHS. He was delighted with this idea, and set himself a target to walk 10 miles in just five days, Monday-Friday.

Donald has so far raised over £3,000, as a result of completing 10 laps each morning and 10 each evening over the five days. Donald said:

Donald said: “I was very overwhelmed by all the support I received and was most surprised that I raised that amount of money. I felt a sense of achievement after I had done it but I think I will go back to doing just a few laps a day for now.”

“I decided to see if Donald would like to embark on this challenge because we as a community wanted to give something back to the NHS and I also felt it would give Donald a focus during lockdown.

“I put the benchmark at just £300 on ‘Just Giving’ so was overwhelmed with the final amount. We would like to thank everyone who donated and supported Donald, it gave him an immense sense of pride and achievement.”

To donate to the NHS in support of Donald’s incredible achievement, visit: https://www.justgiving.com/fundraising/sharon-parkes6?