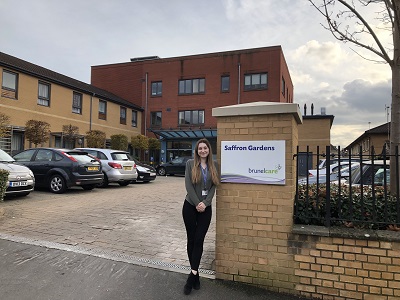 Sasha Matthews, 20, and HR Apprentice at Brunelcare, recently made an incredible discovery about her family history, her Great Grandmother mother, Alice, also used to work at the charity during WW2 delivering hot meals to the older people of Bristol during the blitz.

Sasha has worked at our central office since starting her HR apprenticeship in November 2018, she joined Brunelcare as she wanted to work for a cause she was passionate about – not realising Brunelcare was a significant part of her own family’s history. Last August, Sasha’s Great Grandmother, Alice, sadly passed away. During her memorial service, Sasha made an amazing discovery – Alice had also worked at Brunelcare 75 years ago!

In 1941, Brunelcare was established to support older people in the aftermath of WWII. Initially established as Old People’s Welfare Committee (OPWC), the key objective was to “keep them warm, keep them fed, keep them alive.”

Sasha said: “I found out that before Brunelcare started providing housing and accommodation they had a task force of volunteers who delivered hot meals to people who needed help and my Great Grandmother was one of the brave volunteers.”

Alice’s role at Brunelcare many years ago was to deliver meals to families who had been affected by the war, cycling all over Bristol with hot meals. Travelling around the city in the bitterly cold winter, Alice would fill her basket with straw and newspapers to try and keep the meals warm for as long as possible.

Sasha said: “During one of her deliveries in Patchway, Bristol there was a sudden violent air raid and she ran to the nearest air raid shelter to wait for the bombings to pass. It was a terrifying experience for her, but luckily she was unharmed. It didn’t stop her from her work, she continued to deliver meals to the families that needed them the most, showing just how much of selfless of a person she was.”

Finding out that her Great Grandmother was one of Brunelcare’s first volunteers has been a heartwarming discovery for Sasha, and she says it has made her even more proud to be part of something more at Brunelcare.

Sasha said: “It warms my heart to think that all these years later I am working for the same charity she risked her life for, it makes me extremely proud that another generation of my family is here.”