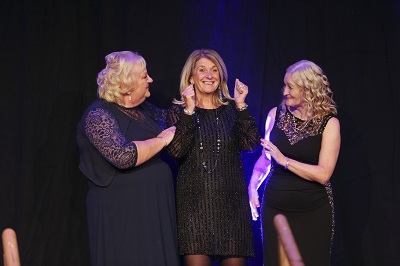 The stars of social care in Wales were given a chance to shine at a moving awards ceremony where there were smiles and tears of joy in equal measure.

They were honoured at the Wales Care Awards otherwise known as the Oscars of social care, sponsored by Onyx Healthcare, in the august surroundings of City Hall in Cardiff.
Compere for the evening was the incomparable Wynne Evans, the top tenor who is best known these days as Gio Compario from the Go Compare TV ads and a Radio Wales presenter.

The blue riband Spirit of Care Award went to Claire Aston, the Divisional Nurse and Head of Long-Term Complex Care for the Aneurin Bevan University Health Board based in Pontypool, who believes that the “hidden voices” of some of those in care – frail or vulnerable residents – should be heard.
Claire, who lives in Newport with husband of 33 years David, also won a gold award in the 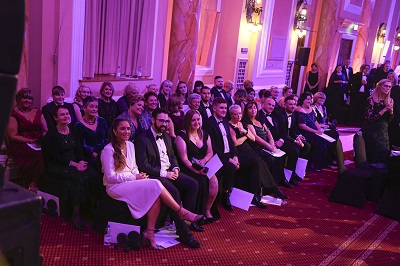 category for Commitment to Training and Workforce Development.

She said: “To take gold in the commitment to training category was just amazing and a recognition of the work my colleagues and I do.
“It was a double whammy in a massive way to go on to win the special award, which I didn’t expect at all.
“I was speechless – which is odd for me – and it’s hard to describe the buzz coming up from the audience.
“It was just a fabulous night with so many fantastic people in one room and a credit to the people from the Wales Care Awards for how they had organised it.”

The Lifetime Achievement Award went to Paula Abbandonato from Cardiff-based Vibe PR and Marketing, for providing an event management service to the Wales Care Awards since their inception and also for her tireless work with the A-Sisterhood charity, a UK-based organisation that seeks to empower, support and protect women worldwide.

The prestigious Sir Bryn Terfel Foundation Wales Care Award for Promoting the Arts in Social Care was given to Arts and Business Cymru and was presented by Sir Bryn’s son, Tomos, to their chief executive, Rachel Jones.

The winner of the Peter Clarke Award for Promoting Excellence in Services for Children and Young People was Shirley Johnson, a team leader with the Branas Isaf, based in Corwen in Denbighshire, who often puts on fancy dress as part of her fun and creative approach to making life more special for the young people she works with.

She is described as the “go-to person” for six boys aged 16 to 18 with complex behavioural issues.
Shirley said: “I was very proud but I believe you are only as good as the team you are part of, so I was accepting it on behalf of myself and them.
“It was difficult to realise I had won but people tell me I deserve it so I suppose I’ll have to believe them.”

Among the VIP guests was Julie Morgan AM, the Welsh Government’s Deputy Minister for Health and Social Services, who presented the Dignity in Care Award and paid tribute to the social care workforce.

She said: “It’s a great honour to be here this evening and I’ve been deeply moved by hearing about the great achievements of everybody in this room, and everybody who works in this field.
“I really feel the fantastic work that’s going on is not acknowledged enough.
“What more important job could there be than to look after people who need our help? I want to pay tribute to all of you.”

It was a sentiment echoed by Mario Kreft MBE, the Chair of Care Forum Wales, who said the Wales Care Awards had gone from strength to strength.
He said: “The Wales Care Awards was established 17 years ago to raise the status and the profile of social care workers who do such a vitally important job, providing care for the most vulnerable people in communities across Wales.

“Since then we have presented hundreds of the coveted awards to these richly deserving heroes and heroines who have also featured in the stories we have sent out to publicise the immense value of what they do – day in, day out.
“Traditionally, social care has not been given the prominence it deserves but finally it is achieving the recognition it deserves as one of the four pillars of the Welsh Government’s economic strategy for the Foundation Economy. It is now seen a value to our nation and not merely a cost.
“That can only be right because social care employs six per cent of the Welsh workforce and underpins the NHS which would be stretched to beyond breaking point without the sector’s support.
“Care Forum Wales has worked tirelessly over the past 25 years to raise the profile of the social care workforce.
“Our aim is to ensure that these awards continue to be a beacon of hope and a way of recognising the status and significance of the wonderful people who work in social care.
“Tonight is all about saying thank you to the people who deliver these vital services and the sector they represent.