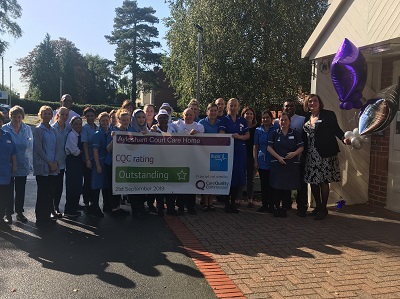 The move means that 7.4% of Bupa’s homes are now rated as ‘Outstanding’ by the Care Quality Commission (CQC), compared to a national average of 3% of homes across England.

During their unannounced visit CQC inspectors were especially impressed by home’s dedication to helping residents live their best lives. Their report celebrates the team for providing “care and support that not only met their care and support needs, but also their social, cultural and spiritual needs”.

The regulator also noted that residents “were treated with great kindness and fully respected by the staff who supported them.”

Speaking of the result, Kate O’Sullivan, Home Manager at Bupa Aylesham Court, said: “We’re absolutely thrilled by the news! I’ve always known that we had something special at the home, but to achieve an ‘Outstanding’ rating really marks the gold standard. I’m so proud of my team too, as I know that every single one of them plays such a tangible role in the home’s success.”

Joan Elliott, Managing Director for Bupa Care Homes, added: “This is fantastic result for everyone at the home and continues a hugely successful year for Bupa. Twelve months ago we had two Outstanding homes and today we’re celebrating our ninth. It’s taken a lot of hard work from our teams, but the results speak for themselves.

“While I’m not surprised to see Aylesham Court ranked amongst the best in England, I am delighted that the inspectors got to see just how far the team goes to make our residents smile every day. Congratulations all!”

In the report, the team at Bupa Aylesham Court were praised for the wide range of activities they provided for residents, including line dancing sessions and a regular residents’ choir.

Originally launched in June 2018, the home’s choir proved an instant success and now has a host of regular attendees. In addition to regularly singing within the home, the group has also performed as part of an musical show for audiences at local college.

Talking about the activities, Kate added: “There’s a misconception that life in a care home is boring, so we’re doing everything we can to bust that myth! The line dancing classes were a personal favourite and a great way of keeping residents happy and healthy. Just because you’re in your 90s doesn’t mean you can’t dance – it’s about adapting the activities so everyone can get involved.”

Elsewhere in their report, inspectors praised the home for their collaborative approach to care, noting how “people and staff were empowered to voice their opinions, and the management team always responded to comments put forward”.

For example, in one meeting held, people said they’d enjoy food taster sessions and a knitting club, both of which had subsequently been introduced at the home. Elsewhere residents were asked to help choose the wallpaper and furnishings for a communal area, before enjoying a shopping trip to help purchase them.

In another example, the home was caring for a resident whose son was getting married. As she was too unwell to leave the home, colleagues arranged for her to join the celebrations virtually, by setting up a Skype service.

Regulators also noted that “staff were extremely motivated and proud to work at the service” and regularly went above and beyond. They also praised the home’s understanding of the importance of food and nutrition. In one example, the report cites how the home’s chef – Michael D’Souza – supported a resident to enjoy foods that were culturally important to her, both making things himself and purchasing specialist dishes from a nearby curry house.

Elsewhere the home introduced picnic boxes for residents who were struggling to maintain their weight, which were full of nutritious foods for people to snack on during the day, and also organised regular cheese and wine evenings which were popular among residents.

Located on Hinckley Road in Leicester Forest East, Bupa Aylesham Court provided care for up to 60 residents and provides both long-term and short stay care. In addition to an ‘Outstanding’ rating from the CQC, the home also has a rating of 9.8 out of 10 on carehome.co.uk, based on independent reviews from residents and their families.