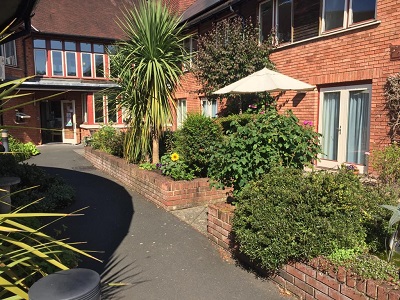 A community healthcare facility in Ledbury has been recognised with the highest possible award in the regional finals of this year’s Britain in Bloom competition, after a project that has left a lasting legacy for residents and local volunteer groups.

Ledbury Community Care Centre, run by Shaw healthcare, incorporates a nursing and respite care home, several outpatient departments, including chiropody and radiology, intermediate care beds, as well as a GP surgery and NHS Dentist. The centre also has an acquired brain injury unit called Market Lodge, which provides care and therapeutic support for people who have received an acquired brain injury through direct or organic trauma.
Facilities manager, Graham Roberts, who has worked at the centre since 2002, is a passionate gardener who made it his mission to enter the competition. With help from staff, residents, volunteers and a few local businesses, the centre was able to enter the Neighbourhood Interactive Project & Participation category for the ‘Heart of England’ region, achieving 91 out of a possible 100 marks and an overall ‘Outstanding’ award.

“The Award was recognition of the incredible efforts of so many people and we are extremely grateful for all the time people dedicated to create such a special place in the heart of what is a very special community,” said Mr Roberts. “It was heart-warming to see how local people engaged with the project and totally embraced the excitement of being involved. However, we know how important the garden is to the wellbeing of those who receive care at the centre, who are going to be main beneficiaries of the project and its legacy.”

The project was supported by two main groups of volunteers – the Evergreens, a collection of elderly people from the local area and a second group of younger people with learning difficulties. Planters were built and donated to the centre by a local company, Salters Hill, while Roses Country Fayre Garden Centre and Hereford-based Daniel Squire Garden Services also supported the project.

Residents and out-patients at Ledbury Community Care Centre can now enjoy a new sensory herb garden, magnificent hanging baskets and a well-stocked rear garden that doubles as an outside dining space, concert area and art gallery. The installation of raised and movable beds has improved accessibility, which means that residents can now get involved in looking after the garden in the future.

In summing up the Ledbury Community Care Centre garden project, the Chair of the judging panel wrote; “If one is unlucky enough to need care in Ledbury, this is the place to be. Wonderful floral baskets and a rear garden so well planned and planted. Accessible raised beds, some movable on wheels, herb containers both for culinary and sensory use, lots of artwork and creative pieces throughout. The staff and the group of volunteers from the Evergreen Club have so much passion for both patients and place, it is truly inspirational.”

Collectively, the town of Ledbury was Awarded GOLD in the Britain in Bloom competition for the 13th consecutive year.