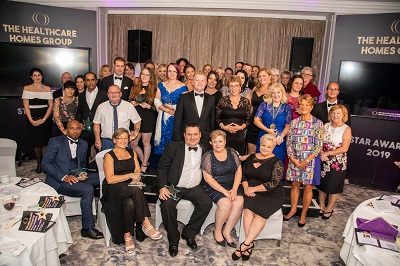 Healthcare Homes Group, which provides residential and domiciliary care services, has hosted its second annual Star Awards event to recognise the efforts of its staff and to celebrate excellence across its organisation.

In total, nineteen awards were presented to staff who have consistently excelled in their performance, and demonstrated continued dedication to delivering the very best care services throughout the group.

The awards, which took place at a gala reception at Hanbury Manor in Hertfordshire, were launched last year to recognise residential carers, domiciliary carers and staff that go ‘above and beyond’. Nominations were encouraged across the group, which is made up of 37 residential and nursing homes, plus 13 homecare branches as part of its Manorcourt Homecare business, all of which are located across the south and east of England.

The winners were announced as follows:

Gordon Cochrane, CEO of Healthcare Homes Group said: “It has been wonderful to come together as an organisation to recognise and celebrate the fantastic work delivered by our teams every day.

“We’re privileged to work with a large workforce, made up of individuals who have the wellbeing of those we care for at the heart of all they do. Whether they’re delivering frontline care, supporting the smooth running of our homes or working within our administrative teams, they each play a crucial part.

“Our Star Awards give us the chance to shine the light on examples of exceptional work.  It’s never easy to decide between the fantastic nominations we receive and I would like to congratulate and thank everyone who was nominated, shortlisted and of course, this year’s very deserving winners.”