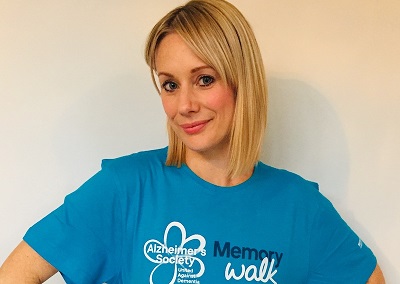 Former EastEnders star Kellie Shirley joined a tide of people in London to unite against dementia at the first ever Memory Walk Marathon and Half-Marathon event, organised by Alzheimer’s Society as part of their Memory Walk season.

Kellie, who shortly returns to our screens in Idris Elba’s new Sky series In the Long Run, cut the blue ribbon at Southwark Park to start Alzheimer’s Society’s Memory Walk, before setting off on a half-marathon walk along the Thames.

She also told Memory Walk fundraisers that she had been inspired to help Alzheimer’s Society find a cure for dementia after learning that fellow EastEnders star Barbara Windsor was living with Alzheimer’s disease.

Kellie said: “This is my first Memory Walk for Alzheimer’s Society, but it won’t be my last! I’ve been inspired to take part after running the London Marathon with Barbara’s Revolutionaries earlier this year.

“Barbara Windsor is a massive influence in my life. She was my mentor when I was at EastEnders and we’ve remained close friends. Taking part in the London Marathon in her honour was special. It gave all of Barbara’s Revolutionaries an opportunity to bond and raise money for a fantastic charity.

“After running three London Marathons it felt like the perfect time to take on Alzheimer’s Society’s Memory Walk Half-Marathon challenge. I love that we all get to walk together and celebrate the life of our loved ones, knowing every step we take will help towards raising funds to support others.”

Ahead of her walk, Kellie, made a heartfelt speech to her fellow fundraisers from the stage, stating: “Everyone taking part in Memory Walk knows family or friends who have developed dementia and there will be people here who are living with it.

“We’re all here for the same thing – to raise hard cash so we can cure dementia. We’re getting closer to finding a cure in our or our children’s lifetimes and that’s really exciting.

“Alzheimer’s is a really awful disease and I’ve seen it first-hand, having worked in care homes in between acting jobs before appearing in EastEnders with Barbara, who is an absolute legend – these are the reasons I’m supporting Alzheimer’s Society, which is an amazing charity. I love it so much.

“It’s worth bearing in mind that every three minutes when we’re walking, someone in the UK will be diagnosed with dementia which is huge – and that’s why we’re taking part in Memory Walk. I thank everyone who is going the extra mile for the charity from the bottom of my heart.”

Kellie cut the starting-line ribbon with Hannah Mackay, a 36-year-old mother-of-two, from East Sussex, who has been told that she will develop the same form of inherited dementia that has affected her grandfather and father.

“Too many families are being cruelly torn apart by dementia, and we urgently need more funding for research to help us find a cure so others won’t have to face its heart-breaking impact.

“Dementia is the UK’s biggest killer with someone developing it every three minutes – yet dementia research still trails far behind other health conditions, after decades of underfunding.

“Alzheimer’s Society is committed to spending at least £150 million over the next decade on dementia research to improve care and find a cure.