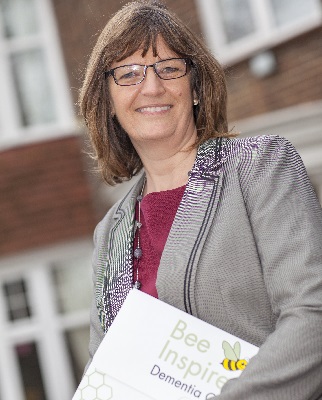 The National Dementia Care Awards is a yearly event that recognises excellence in the dementia care sector. There are 16 categories at the awards which focus on all aspects of dementia care that help make person-centred care a reality. Jackie has been nominated for the Lifetime Achievement Award, which recognises an individual who has spent a significant portion of their life dedicated to improving quality of life for people living with dementia.

Jackie has been shortlisted due to her lifelong work improving the lives of people with dementia. Over the course of her career she has worked to improve the quality of care people receive and to change the narrative on dementia patients’ cognitive rehabilitation potential. She has had a varied career, working in care homes as an Occupational Therapist, setting up her own specialist dementia care consultancy and publishing an internationally recognised framework on dementia care – the Pool Activity Level (PAL) Instrument for occupational profiling. She has also contributed to the Department of Health’s National Dementia Strategy.

Contributing to her shortlisting is the fact that her work continues to this day. in her current role at Sunrise Senior Living UK and Gracewell Healthcare she has continued her life’s work raising standards in care and dignity. As Director of Memory Care she has championed Cognitive Stimulation Therapy for residents living with moderate dementia and Cognitive Rehabilitation Therapy for those living with early to moderate dementia to stimulate thinking and memory. She has also pioneered initiatives that focus on sociability and dignity, including rolling out an Enriched Dining scheme across Sunrise and Gracewell homes, taking an activity-based approach to mealtime engagement.

The awards are organised by The Journal of Dementia Care and the winners will be announced on Thursday 7th November at the Doncaster Racecourse.

“It is an honour to have been shortlisted for the lifetime achievement award. My interest in dementia stems from seeing my grandmother living with the condition during my childhood, so it has been a privilege to have been able to help others living with dementia throughout my career.

“When I look at the difference between dementia care when I first entered the profession in comparison to the work I now oversee at Sunrise and Gracewell, the improvement in care is astonishing and I plan to keep raising standards.”