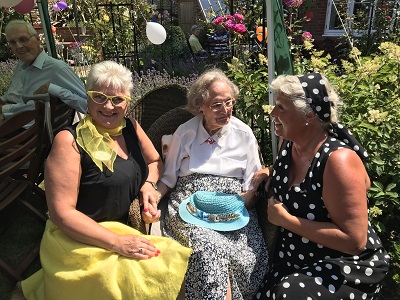 Residents of a Chichester care home were taken back to the 50s and 60s during a recent barbeque.

Hit tunes from the era played as Wellington Grange residents, family members and friends feasted on sizzling delights such as ribs and lamb burgers.

Staff got into the swing of the event by dressing in colourful outfits and dancing to the music.

Resident Lorna Cook, 96, said she had really enjoyed hearing the tunes of her youth.

“I liked listening to the music. I was married in 1945 and my late husband was in the navy.

“I had three boys and this was the music that would have been playing when they were growing-up,” she said.

Kay Vevers, Companionship Team Leader, explained this was one of several events planned  the year.

“Everyone gets involved and during arts and crafts sessions, residents helped to make decorations for the garden in preparation.

“We had Jennifer from Through the Years singing and Town Crier Jane Smith came along too,” she said.

Wellington Grange offers the highest quality residential and nursing care from its location close to the historic city centre of Chichester.