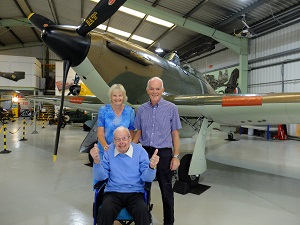 Rogers House Residential Care Home resident, Eric Robinson, served nearly five years with the RAF during WW2, working as a wireless operator, so when he was offered the chance to visit Biggin Hill as a VIP, he jumped at the chance.

Accompanied by his daughter, Sue, son-in-law, Eric and home manager, Jackie, Eric made the nostalgic visit to Biggin Hill on Thursday 1st August, to the Heritage Hanger, where he was able to view and learn about the aircraft and even watch a Spitfire take off and land.

Taking him back almost 80 years, Eric was overwhelmed as he viewed the many iconic planes on display, watched a Spitfire take off and even observed some of the finest aircraft in the world, including some rather fancy helicopters and jets. During the visit, Eric said, “I have had an absolutely fantastic morning, this really is wonderful!” 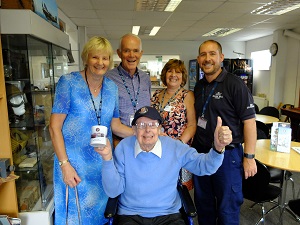 Jackie Miles, Home Manager of Rogers House added: “We are so grateful to the staff at Biggin Hill for kindly taking time out of their day to show Eric around. He was completely blown away and you could just see how much it meant to him, he was so animated throughout. It was very emotional for everyone but wonderful to be a part of. We’re so pleased we could arrange it.”

Eric was called up to serve when the war broke out at 19-years-old, prior to that he was in the reserves. He was sent to Thornaby, Yorkshire, where he started his RAF career working as a wireless operator. Once grounded, Eric served at Thornaby Airfield servicing aircraft, before moving onto Hampshire and Doncaster. He was discharged under Class A after five years and still remembers his service number to this day, 759023.