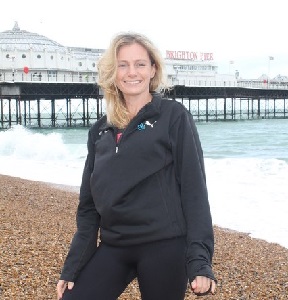 A 35-year-old mother of two young children has united with Alzheimer’s Society by joining their Memory Walk campaign to raise vital funds to beat dementia, after learning she will develop a rare inherited form of the condition.

Tests have confirmed Hannah Mackay has a gene that means she will develop the same form of dementia, frontotemporal dementia (FTD), which both her father and grandfather developed in their mid-50s.

Police officer Hannah has responded to a potentially devastating blow by deciding to take part in one of 38 flagship Memory Walks that will be happening nationwide in September and October, and to mark its 40th anniversary year, Alzheimer’s Society is calling on everyone to join Hannah and unite against dementia by signing up for Memory Walk. Hannah has been spurred on to join the Brighton Memory Walk on 7 September, after being told she will one day be living with dementia, unless a cure is found.

As a founding funder of the UK Dementia Research Institute (UKDRI), Alzheimer’s Society has invested £50m to power discoveries to prevent, treat and care for people with all types of dementia, as well as understanding how to keep the brain healthy.

It was after Hannah learnt she had a fifty-fifty chance of developing dementia that she decided to remove uncertainty over her future by undergoing genetic tests.

Hannah and her father have both taken part in a research study to help scientists learn more about FTD. Her push to raise money for dementia research comes at a critical time as the UK Dementia Research Institute (UKDRI) has just announced plans to develop a platform for gene therapy treatments.

The UKDRI is a unique collaboration, bringing together the brains of six universities across the country with hundreds of world-leading researchers working tirelessly to beat dementia.
One of the first gene therapies to be tested at the UKDRI will be for people like Hannah who have a mutation in the gene for progranulin. This faulty gene is found in about 20% of people with FTD. 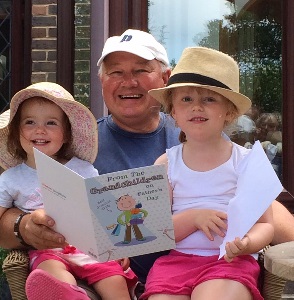 Speaking about her support for Memory Walk, Hannah said:
“The day I found out I would develop dementia changed my life, but not necessarily for the worst. I remember just feeling at first like I had been kicked in the stomach when they said it was bad news.

“I was crying, but I was crying with relief that the process was over. I knew then that I didn’t need to be afraid of the unknown any more.

“I hope my story can bring people together to raise awareness and vital funds to help scientists find a cure for dementia. Dementia is now the UK’s biggest killer but research still falls far behind other health conditions as it’s historically been so poorly funded.”

Knowing her three and six-year-old daughters might develop dementia has strengthened Hannah’s determination.

“I want my children to know that if their Mummy does get poorly that she did everything she could to make it better – for them, for me and for other people. There’s a 50 per cent chance this will personally affect them too so I’m going to do everything I can to stop that from happening.

“At this stage, they don’t need to know great detail – they just need to know that Mummy is doing everything to ensure that she doesn’t get ill by doing something positive.”

Now Hannah, a sergeant in the Sussex police force, is setting her sights on helping Alzheimer’s Society raise millions of pounds for research, care and support through Memory Walk.

“I’m happy to do anything for Alzheimer’s Society because we share the same goals – to beat dementia,” said Hannah, who lives near Haywards Heath, West Sussex.

“I know every penny raised through Memory Walk will help Alzheimer’s Society find a cure, improve care and support people affected by dementia. In the hour-and-a-half it takes to complete your average Memory Walk, 30 people will develop dementia in the UK so I hope people will sign up to Memory Walk now to unite against dementia.

“I promised several people I would fight dementia with whatever I’ve got. I hope I can really make a difference, and if I manage to help and inspire other people then I will die a happy person.”

Dr James Pickett, Head of Research at Alzheimer’s Society, said:
“For people like Hannah who have inherited a rare, faulty gene that causes dementia, this new UKDRI initiative offers the hope of shutting down the harmful effects of the gene and could potentially even help prevent this type of dementia from developing.

“Families like Hannah’s are being cruelly torn apart by dementia, and we urgently need more funding to help us find a cure so others no longer have to face its heart-breaking impact. Gene therapy is already bringing hope for people with other previously incurable diseases, which is why signing up to Memory Walk to raise vital funds is so crucial.

“Until the day we beat dementia, our researchers are working tirelessly to find ways to make quality of life better for people living with dementia in the UK and their carers too.”

Over the past 40 years, Alzheimer’s Society has brought a barely known disease out of the shadows, driving recognition across healthcare professionals to achieve better care and support.

Yet still research is considerably underfunded, at less than 0.5% of the total cost of the disease. Alzheimer’s Society is committed to spending at least £150 million over the next decade on dementia research to improve care for people today and find a cure for tomorrow.

You can help support the work of the UK Dementia Research Institute by registering for your local Memory Walk now at memorywalk.org.uk