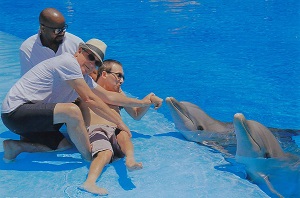 Manorcourt Homecare, part of the Healthcare Homes Group, is delighted to have assisted a client who lives with Cerebral Palsy in achieving one of his ultimate bucket-list wishes; to have a one-to-one dolphin encounter.

Gary Thowney, 35, who lives in Grays, has recently returned from a trip to the Costa Blanca in Spain, which was researched and organised by his Live-In carer, Kennedy Madhombiro. With daily support from Kennedy and the team at Manorcourt Homecare via their 24/7 Live-In Care service, Gary is able to live independently in his own home and was overjoyed at the prospect of travelling to Spain to have a special encounter with dolphins.

Talking about how the trip transpired, Kennedy explains: “I’ve been supporting Gary as his Live-In carer since 2017 and we get on extremely well. I was exploring Gary’s interests with him one day and he talked about his love of animals and in particular dolphins. We started to research into places we could visit where Gary could see dolphins up close and we came across Mundomar in Benidorm, which provides specialist dolphin therapy.”

Having also discovered the Costa Blanca Wheelchair Friendly villa, a week’s visit was booked for Gary along with his father Keith, and Kennedy who would continue to provide Gary’s 24-hour care needs, in addition to supporting him in fulfilling several ‘firsts’.

Continues Kennedy; “The dolphin experience was simply amazing. A lot of people witnessed Gary touching the dolphins for the first time – it was such an emotional moment and everyone there couldn’t help but sense Gary’s absolute delight. Also, the villa was fully adapted enabling us to go about our routine without any issues, and it had the most amazing pool, which Gary enjoyed every day – both in the day and evening!

“We also spent a lot of time on the beach – again, Gary enjoyed several new experiences, including getting sand in between his toes, swimming in salt water and using a special floating wheelchair in the sea, which was amazing; Gary didn’t stop smiling.”

Gary’s father Keith Thowney added: “Travelling to Spain and having the dolphin encounter really was a dream come true for Gary and one he will always treasure. We would like to thank Kennedy for his caring support throughout and in making this possible. His professional support meant this trip was not just a dream but a reality for our son.”

Manorcourt Homecare has 14 branches located across the Norfolk, Suffolk, Essex and Greater London regions and works to provide home-based care and personal support services to people in their own homes, including 24-hour a day Live-In Care services. The Live-In Care services are available across Norfolk, Suffolk, Cambridgeshire, Essex, Kent, Bedfordshire and London Boroughs.

In addition, Manorcourt Homecare has recently launched a new ‘Branch Out’ companionship service, which has been designed for people of all ages and abilities.