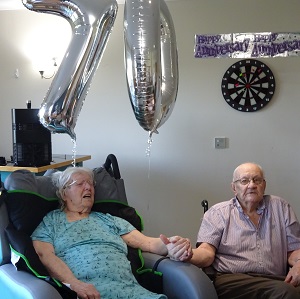 Teddy and Marion Suligowski, both resident’s at Eachstep Blackburn Care Home in Infirmary Road, Blackburn, have recently celebrated their Platinum Anniversary, with a special celebration at the home.

Teddy, who is 94 years old and his wife Marion, who is 90 years old are both residents in the home. They met when they both worked in Stanhill Mill in Oswaldtwistle when Marion was only 19 years old. Their love for each other grew and they married just over a year later in St Mary’s Church, Islington, Blackburn on 23rd July 1949. They have lived in Blackburn all their married lives and have 4 children, Michael, Angela, Patricia and Julian, as well as 13 grandchildren and 9 great grandchildren.

Teddy and Marion received an abundance of cards including a special one from Her Majesty, Queen Elizabeth II who sent warm congratulations to the couple on their Platinum Anniversary. The couple celebrated with a glass of prosecco, a special cake and balloons to mark the occasion.  They enjoyed listening to music from days when they were younger.

“It was an honour to share Teddy and Marion’s special day with them. A Platinum Anniversary is certainly a magnificent achievement. Everyone at Eachstep Blackburn would like to congratulate the couple on this very special day.”

“We are delighted to celebrate Teddy and Marion’s 70th Wedding Anniversary with them and send our warmest Congratulations to the couple. It sounds like everyone had a lovely afternoon with family around them. It is organising memorable events like this that helped Eachstep Blackburn achieve an ‘Outstanding’ from the Care Quality Commission at their last inspection.”