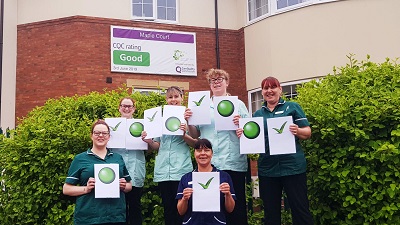 The Care Quality Commission has found the quality of care provided by Maple Court, Barrowcliff Road in Scarborough to be Good across the board following an inspection on April 8th 2019.

The report says that the inspectors found that since the last inspection, Burlington Care  and the registered manager had worked closely with healthcare professionals to implement new systems and recruit new staff. Significant improvements were seen at this inspection and the methods to check for quality and safety had sustained good levels of care for several months before this inspection. This demonstrated they were effective.

The staff team had been inducted, supported and trained, which had brought stability to the service. Staff now understood their roles clearly, and what was expected of them. People were being cared for with respect and dignity; they were also supported to maintain their independence.

The report continues; The staff knew the needs and preferences of residents, and this had led to people receiving person-centred, compassionate care. The care team had worked to improve or maintain people’s quality of life. Feedback from people and their relatives was positive, and they also were able to tell us about the improvements they had felt in the quality of care they received. Staff had developed positive relationships with people, which led to people feeling safe and happy.

People were supported to have maximum choice and control of their lives and staff helped them in the least restrictive way possible; the policies and systems in the service supported this practice.

The environment had been designed to keep people safe and help people living with dementia to find their way independently. People enjoyed access to a secure garden and were supported to access the community to take part in local activities. People told us they were offered a wide variety of activities to take part in if they chose this.

The Inspectors found the staff were caring and compassionate, and people were being provided with safe, responsive, caring, competent and well-led care. A full report of the inspection is now on the CQC’s website: http://www.cqc.org.uk/location/1-353712709