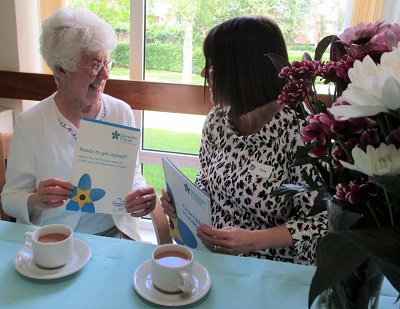 Borough Care, the largest not-for-profit provider of care for older people in Stockport, marked Dementia Action Week (20-26 May) with a range of activities at its eleven homes across Stockport. Organised by Alzheimer’s Society, Dementia Action Week unites people to take action and improve the lives of people living with dementia. Borough Care has over twenty years of experience supporting people with dementia. This year, Alzheimer’s Society encouraged everyone to take action by starting a conversation; whether calling a relative with dementia or visiting a neighbour for a chat.

Meadway Court in Bramhall hosted a week of activities for its residents, starting with a biscuit making and decorating session. Pale blue icing was used for the decorations, to signify the forget-me-not flower, which is the symbol of Alzheimer’s Society.

Some of the residents from Lisburne Court in Offerton participated in an art class, while others enjoyed a dementia walk. Members of the local community were also invited to the home for a cuppa and a natter. Staff at Lisburne Court and Shepley House joined forces to take residents to the Greater Manchester Fire Service Museum and to enjoy a concert at The Plaza theatre. At Bamford Close in Cale Green, residents wrote down their dreams and wishes on cards, which were hung on trees around the home. The staff at Bamford Close will be helping make these wishes come true by tailoring an activity or theming an event around the residents’ dreams.

Lots of different music related activities were organised by Borough Care for its residents. Music is an effective way to communicate, or engage, with someone who has dementia, as it accesses different parts of the brain than language. Meadway Court held a ‘Boogie Beats’ session, where a group of young children visited the home to interact with residents through music and movement. Residents at many of Borough Care’s homes were also entertained by singers during the week, with the opportunity to sing along and reminisce by listening to songs from the past.

Dr Mark Ward, Chief Executive Officer at Borough Care, says: “At Borough Care we believe good dementia care is about creating a positive culture that respects people. We’re committed to understanding the uniqueness of the people affected by dementia and the individual support both they and their families need. The care and support we provide is positively person centred and reflects the long term, progressive nature of dementia.”

Over 4,000 people in Stockport are estimated to suffer with dementia and prevalence rates are higher in the borough than the national average.