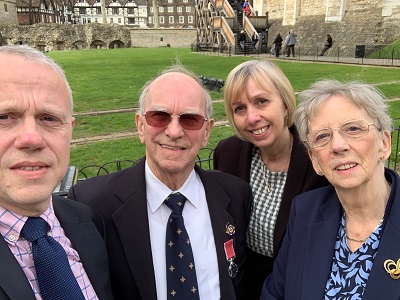 A volunteer at The Royal Star & Garter Homes has collected his British Empire Medal at the Tower of London.

John Parvin was awarded the medal in the Queen’s New Year’s Honours list for voluntary service to Veterans, and received it at a ceremony on Friday 5 April.

It capped a memorable few months for the 83-year-old, who also received a special community award from the Mayor of Kingston along with his wife Lesley, her sister Shirley Pass, and Shirley’s husband Terry Pass. Together, they have been volunteering at The Royal Star & Garter Homes since 1993, giving collectively nearly 100 years to the Charity, and received the group award from Kingston Mayor Thay Thayalan last month.

Terry and Shirley were unable to attend that ceremony, so a special tea party was held at the Surbiton Home on Tuesday 9 April, where all four were thanked by staff and residents, and John was congratulated for his BEM. 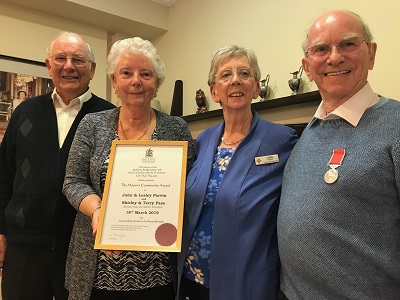 Afterwards, John said: “It was a brilliant party and we were touched that so many residents and staff were there, it was a lovely gesture. All four of us found it very humbling.”

The Royal Star & Garter Homes cares for ex-Servicemen and women and their partners living with disability or dementia.