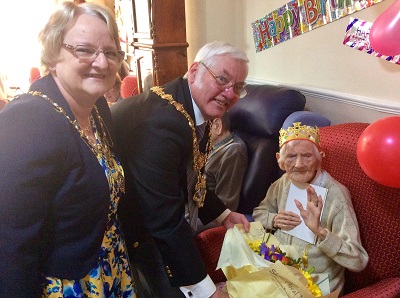 A PARTY was held at a Rotherham care home to celebrate resident Clarice Bloy’s 105th birthday.

The centenarian was presented a bouquet of flowers and her sixth card from the Queen by the town’s Mayor Cllr Alan Buckley and Mayoress Sandra Buckley.

An entertainer performed hits from throughout the decades at the party, which had visitors and residents on their feet and dancing. There was also a birthday cake and buffet.

Clarice said: “It’s been marvelous. I can’t believe the Mayor came to see me. It’s been so special. Thank you.”

Clarice was born on 5th May 1914, just over two months prior to the outbreak of the First World War.

As part of Remembrance Day activities at Broadacres Care Home last year, she recalled living through air raids in her childhood, in Staveley, near Chesterfield, where she attended Christ Church School.

Clarice said: “Our family friend John would take my sister, Alice, and I down to the cellar when the air raids would start.

“We would hide behind things, covering our ears. We were very young, so it was really scary.

“Sometimes we were down there for a long time, so Alice taught me how to dance.

“She was a beautiful dancer, so we would have some fun, even through bad times.”

Her fondness for dancing continued throughout her life, as did her love of reading. She has also lived in Canada and later married husband John Bloy, with whom she has a son.

She received a handshake from Mayor Cllr Buckley during last year’s Christmas carol service at Broadacres Care Home, after she recited every word from memory.

Home manager Alex Morton said: “Clarice is a much-loved resident at Broadacres and the party was the least we could do to mark her momentous milestone.

“We’d like to thank the Mayor and Mayoress for attending and wishing her well as well as all the other guests for making it such a special occasion.”