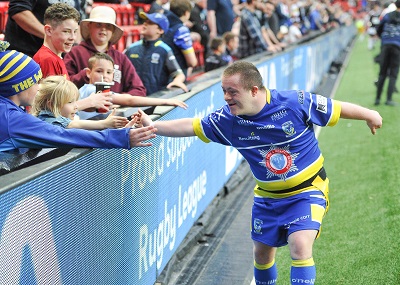 Super League and the Rugby Football League (RFL) have partnered with the national social care charity, Community Integrated Care, to create a ground-breaking adapted form of rugby league for people with learning disabilities and autism. Backed by 12 major rugby league clubs and integrated into the Super League calendar, this is the first ever example of a professional sports league sharing its brand with a learning disability sports programme.

The launch gave almost 160 people the opportunity to play in front of tens of thousands of people at the famous home of Liverpool F.C. Playing in the halftime slot of the headline fixtures of the Dacia Magic Weekend, the Learning Disability Super League teams took centre stage at the event, which was attended by 56,869 people. 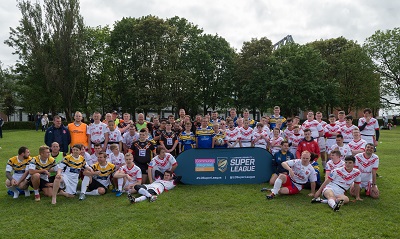 Players were roared on from the stands by supporters from across the sport, who cheered them on as Super League heroes. The launch of this world first programme attracted unprecedented media attention for a social care inclusion project, with content from the event achieving more than 300,000 video views and 1 million impressions on Twitter over the weekend. Messages of support from Super League players and legends, coaches, celebrities and the general public flooded social media, as the rugby league family fully embraced the initiative.

The Community Integrated Care Learning Disability Super League teams were also given the opportunity to play in the shadows of Anfield Stadium, in special festivals at Stanley Park. The programme has been praised by participants and their family members, social care sector organisations and the rugby league community for its impact in promoting inclusion and developing invaluable social and life skills of participants. Speaking at the event, many players described their experience as “a dream come true” and “life-changing”.

We have been humbled and astounded by the impact this has made on players and their loved ones and the support that we’ve been given by the public. This has only been possible because of the values and commitment of Super League, the RFL, the clubs, and the entire rugby league family. This project delivers more than just the opportunity to participate in the great game of rugby league – it brings communities together, creating unforgettable opportunities and changes lives.” 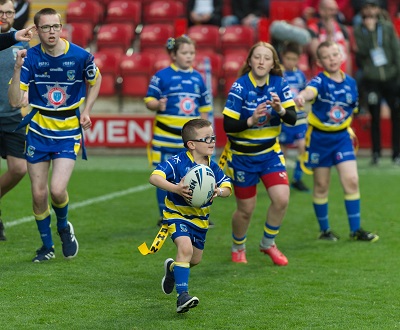 The launch was one of the highlights of the 2019 Dacia Magic Weekend. It was incredible to see the passionate support from the Anfield crowd in cheering on the players. I’m excited for how this programme and partnership with Community Integrated Care will continue to develop in the years ahead.”

Ralph Rimmer, CEO of Rugby Football League, says: “Rugby league is always for everyone. This means everyone who wants to play our sport or be involved in it in other ways should be able to do so in the way that’s right for them. The Community Integrated Care Learning Disability Super League is a wonderful partnership. The Rugby Football League also looks forward to working with Community Integrated Care on volunteering opportunities, as the sport works together to ensure that all parts of rugby league are inclusive and welcoming.

Playing at Anfield was a very special achievement for all players. I know that they and their loved ones enjoyed every minute, and they should feel very proud.”