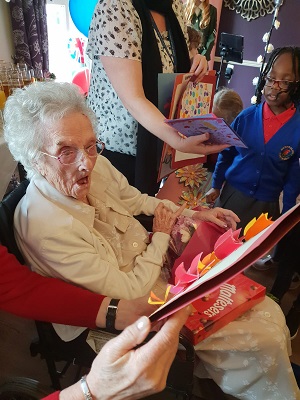 Born Hilda Heath, on Sunday 15th March 1908 in Selby Park, Hilda was joined by friends, family and local school children who created their own birthday cards for Hilda, at Bowood Court & Mews for a fun-filled day of 1940s themed celebrations!

One of six siblings, Hilda worked as a dress maker all her life at Balsall Heath Factory. Starting there at 16 and finishing at 60, Hilda has been retired for 51 years!

At age 29, Hilda married her love, Arthur and together they had one son, Barry and 7 grand and great grandchildren are today proud to call Hilda ‘grandma’. Hilda fondly remembers enjoying family holidays in Blackpool and tandem cycling with Arthur.

Dawn Leaver, Bowood Court & Mews Manager added: “We have loved being part of Hilda’s amazing 111th birthday celebrations – it was an honour to create such a wonderful party for her. Hilda has lived here since 2015 and she happily spends her days enjoying our entertainers and is quite partial to a drop of sherry! Hilda proudly displays her cards and telegrams from the Queen in her room here and we know her favourite colour has always been pink, which is why we made sure her birthday cake was pink! It was lovely to see so many people at her party, 111 is quite an achievement!”