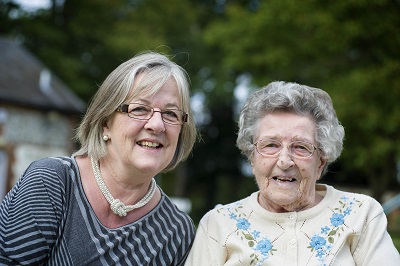 Caring for elderly parents living at home, coupled with the responsibilities of working and supporting children and grandchildren is something many adults in the ever-growing ‘sandwich generation’ are faced with.

A spotlight on Carolyn and Marlin

We speak to Carolyn Knight, whose mother Marlin was struggling to cope in her own home. A nasty fall forced them to make a difficult decision about Marlin’s future – something they both feel has been incredibly positive and has given them that precious mother and daughter time back. Marlin now lives at Sanctuary Care’s Watlington and District Nursing Home in Oxfordshire and Carolyn talks about her experience of moving a loved one into a nursing home.

When things started to change

Despite working long hours as a secretary for a post-transplant nursing team, Carolyn would spend a day each week at her mum’s house 30 miles away from her own home in Buckinghamshire. She would take her grocery shopping, clean her apartment and support her with anything she needed. There was little quality time together and Carolyn began to worry about her mum’s ability to cope alone at home.

She says: “Every time I showered her there were more bruises from where she had bumped into things. She had spilt boiling water from the kettle and things like that were worrying her, even though she wanted to keep her independence.” Marlin was also becoming increasingly unsteady on her feet but was desperate to stay in her own home.

Carolyn worried, in particular about something happening to Marlin at night and said: “I was very anxious leaving her. When I phoned at night she still could have put the phone down and then had an accident and hurt herself and I wouldn’t know if something had happened.”
One morning someone was delivering Christmas cards and heard Marlin calling for help, she was lying on the floor of her apartment and had been there for 16 hours. She had been unable to raise the alarm after falling because the pendant she wore around her neck to summon help in an emergency was on the sofa.

Having tried to pull herself across the floor, Marlin caused a serious injury to her leg and she and Carolyn were told she would need long-term nursing care to recover.

That is when they knew Marlin could not return home. Since moving to Watlington and District Nursing Home, which provides intermediate care and support for people following a spell in hospital, as well as nursing and dementia care, they have never looked back.

Carolyn said: “Mum was initially upset as the decision was out of our hands and she had no idea that when she went to hospital that day she would never return home. But very quickly she said it was the best thing that could have happened because she couldn’t have carried on how she was.

“For me it was the peace of mind and sense of relief, because I now I knew that she was safe.”

Marlin very quickly started to love life in her new home, the people she was surrounded by and the staff caring for her.

For Carolyn the pressure of worrying about her being alone had gone, she was no longer working and caring for her mum during every spare moment she had, and most importantly the pair could enjoy spending genuine quality mother and daughter time together again.

She said: “It is a totally relaxing situation because I know she is being cared for, she is enjoying the company, the food and the activities. It is also great because I can join her when she goes on trips or we can just sit and chat. Now it is ‘our time’ again. Joining her when she goes out and seeing the pleasure she gets, it makes me quite tearful because we are able to do things now that I couldn’t have done with her before.”

Marlin agrees: “I feel very relaxed – you can’t be unhappy here. It’s the friendliness of everyone – and I love having my hair done every Friday. It makes me feel like I am going to Buckingham Palace!”

Home manager Julie Cooper said: “It is really heart-warming to see Marlin and Carolyn spending quality time together and being able to enjoy so many special moments. We actually managed to take them both to Buckingham Palace for real, with a very special trip in Watlington’s minibus. This was a really wonderful time for them both and one of those memories that will always be very special.”