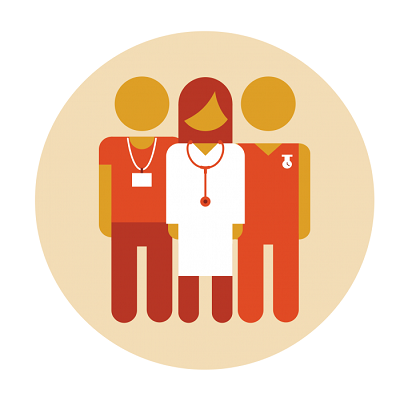 Brexit has major implications for health and social care in England. Here we look at some of the latest developments that could impact the health and care system in England.

The deadline of 29 March 2019, set when Article 50 was triggered, is rapidly approaching but many important issues are still to be resolved. Brexit has already had an impact, especially on the recruitment and retention of EU nationals in some parts of the workforce which is contributing to shortages of key staff. In addition, the ongoing debate in parliament and uncertainty about whether a deal can be agreed mean considerable work has gone into preparations for a no-deal Brexit. The Department of Health and Social Care has published guidance for organisations to prepare contingency plans and has established a national operational response centre to lead on responding to any disruption to the delivery of health and care services.

Across NHS trusts there is currently a shortage of more than 100,000 staff (representing 1 in 11 posts), severely affecting some key groups of essential staff, including nurses, many types of doctors, allied health professionals, and care staff. Vacancies in adult social care are rising, currently totally 110,000, with around 1 in 10 social worker and 1 in 11 care worker roles unfilled. International recruitment is a key factor in addressing these vacancies. Brexit and immigration policy will have an impact on the ability of the NHS to successfully fill these vacancies.

The policy of freedom of movement and mutual recognition of professional qualifications within the EU means that many health and social care professionals currently working in the UK have come from other EU countries. This includes nearly 62,000 (5.2 per cent)1 of the English NHS’s 1.2 million workforce and an estimated 104,000 (around 8 per cent)2 of the 1.3 million workers in England’s adult social care sector (NHS Digital 2018; Skills for Care 2018). The proportion of EU workers in both the NHS and the social care sector has grown over time, suggesting that both sectors have become increasingly reliant on EU migrants.

The UK has a greater proportion of doctors who qualified abroad working than in any other European country, except Ireland and Norway. Latest General Medical Council (GMC) data shows that the number of doctors from the European Economic Area (EEA) joining the medical register is holding steady (but still down 40 per cent on 2014 after new language requirements were introduced). A combination of relaxed visa restrictions and active recruitment by trusts means that the number of non-EEA doctors joining the register doubled between 2014 and 2017 (GMC 2018). However, some specialties not currently on the Home Office’s shortage occupation list are still facing difficulties, for example child and adolescent psychiatry.

Similarly the number of nurses and midwives from Europe leaving the Nursing and Midwifery Council’s register has doubled from 1,981 in 2015/16 to 3,692 in 2017/18, while the number joining fell by 91 per cent (Nursing and Midwifery Council 2018). This fall has been somewhat mitigated by more non-EEA nurses joining the register (Nursing and Midwifery Council 2018). However, even with both EEA and non-EEA registrants taken into account, these figures are considerably below the peak of around 16,000 international registrations in 2001/02. Although there are other contributing factors, including the introduction of new English language requirements in 2016, Brexit has had a significant impact (Murray 2017).

One of the main priorities in the first phase of the UK’s negotiations with the EU was clarifying the status of EU citizens currently living in the UK and of UK citizens living in other EU countries. Any EU Citizen currently living in the UK, including the 165,000 EEA staff already working in health and social care are able to apply for the EU Settlement Scheme. They will need to apply by June 2021 (December 2020 in in the event of no deal) in order to be able to stay in the UK.

The government published an immigration White Paper in December 2018 for a new skills-based immigration system to begin in 2021, treating EEA migrants in the same way as non-EEA migrants. It removes the limit on numbers of skilled workers but proposes an earnings threshold which is likely to impact the ability to attract certain health professionals to the NHS. The threshold has generated fierce debate, and the government is expected to consult for another year on where to set the salary threshold for skilled immigrants.

The white paper acknowledges England’s reliance on migrants in the social care workforce. However, it proposes that for a transitional period such workers would only be allowed to come for a limited time, with no entitlement to bring dependants. Again, this is likely to impact the ability of the social care system to attract sufficient workers. In the event of a no-deal Brexit, for an interim period EU citizens would be able to enter the UK as they do now but if they wish to stay longer than three months they would have to apply for permission under a new European Temporary Leave to Remain scheme. People who obtain this status would be entitled to live, work and study in the country for a further three years. Other workforce issues that will need to be addressed include:

·         the additional cost implications for the NHS of needing to sponsor visas.

·         the need to update employment law: protections for health and care staff regarding employment rights and health and safety at work currently covered by EU legislation. This would include the working time directive, although the current government has committed to preserving this after the UK leaves the EU. These are still under discussion.

The health and social care sectors have long relied on EU and other foreign nationals in all parts of the workforce and will continue to need them in future.

In the short term, we hope the recent announcement about the EU settlement scheme concerning the status of EU citizens currently living in the UK will provide them with reassurance and persuade as many as possible to stay and continue to make a valuable contribution to the health and social care workforce.

In the longer term, while we welcome efforts to increase the domestic NHS workforce, it will take time for many of these policies to result in extra staff on the front line. Providers of NHS and social care services need the ability to recruit staff from the EU and other countries when there are not enough resident workers to fill vacancies. We recommend a broadening of the shortage occupation lists to include a wider range of medical specialties, allied health professionals and social care managers.

We welcome discussions to lower the earnings cap for skilled workers but remain concerned that the current proposals will impact the ability of both the NHS and social care to recruit lower-skilled workers from the EU and elsewhere.

Finally, it is important to recognise that, while Brexit has the potential to compound workforce pressures, the recruitment and retention problems being experienced in health and social care predate the UK’s decision to leave the EU. International recruitment has been very effective in the past and we strongly recommend the government should create a robust and ethical infrastructure for recruiting internationally. Coming to work in the NHS is still not as easy as it should be, and for EEA migrants it is about to get more difficult.