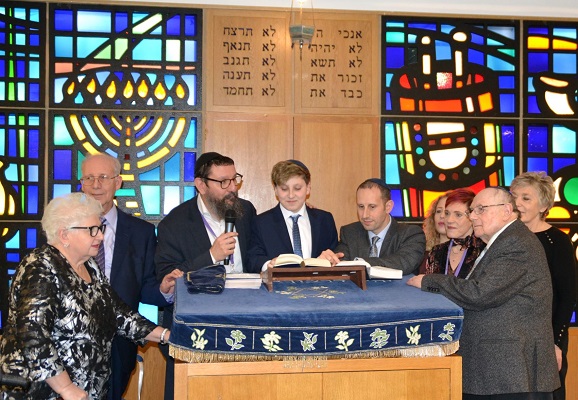 Mikey, 13, who goes to Yavneh College in Borehamwood, was called up to read from the Torah in the Wohl Synagogue at the Centre on Thursday morning.

He then celebrated his coming of age ceremony with more than 60 residents at the home. These celebrations took place before his Bar Mitzvah at Yavneh College at Borehamwood & Elstree Synagogue Community last weekend.

Rabbi Junik, Jewish Care’s spiritual and pastoral leader, officiated whilst Mikey sang part of his Bar Mitzvah Torah portion. Guests then enjoyed entertainment from Moshe Tamir along with a bridge roll tea and heard Mikey’s mum, Naomi, talk about her volunteering at the Centre. Mikey spoke to residents about his life as a 13 year old today.

Rabbi Junik said, “Many guests here have said how much it meant to them to receive an invitation and how much they were looking forward to the celebration. At the age of 13, Mikey is already giving so much to so many people here within the community at the home by celebrating this important life stage in Judaism with them. Becoming older is about gaining wisdom. Mikey has shown wisdom by bringing joy here today, and by coming along the older people here have made his celebration complete.”

The decision to have the party came from Mikey’s family’s strong personal connections with Jewish Care. His grandma, Lydia, said, “I was volunteering at Jewish Care’s Edgware & Harrow Community Centre when I heard about a post that would be perfect for my daughter-in-law Naomi, Mikey’s mum, as a volunteer speech therapist at Jewish Care’s Lady Sarah Cohen House.”

That was more than three years ago and Naomi has continued volunteering there ever since. Since then, she has become involved in many more projects, including reminiscence work, helping to create meaningful stimulating activities for residents.

It was this that gave her the idea to bring the Bar Mitzvah celebration to the home. She says, “I realised that so many older people find it difficult to get to their family Simcha (party), but it’s such a great reminiscence activity for people to enjoy. Maybe they made Bar Mitzvahs for their family or had Bar Mitzvahs themselves and it brings back good memories. So we talked about bringing Mikey’s Bar Mitzvah celebration to the home and it’s worked out wonderfully.”

Mikey’s Dad, Martin, brother, Joel, grandparents, aunts and uncles came along. Naomi continues, “The plan was for there to be a sense of occasion by creating a ceremony and party in one. We are so pleased everyone enjoyed it and I hope they will have the chance to be involved in this kind of intergenerational celebration again.”

Naomi adds, “I feel really honoured to be with this group of people and I want to make it as good as I can for them. I also wanted to do this in memorial of our grandmas who were once residents at the Jewish Care homes themselves. When I was young, my grandparents’ homes were a haven and today is also about expressing gratitude to all those who have nurtured us.”

Now Mikey is following the family tradition and has also begun visiting residents and is looking forward to continue volunteering at the home as part of his Yoni Jesner Award. At the end, Mikey said, “I’m feeling really proud. I’ve really enjoyed my visits to the home so far and I’m looking forward to spending more time with the residents. I imagine lots has changed from when the residents were my age so I wanted to remind them about how special a Bar Mitzvah can be.”

Lady Sarah Cohen resident, Leonard Finkle, was delighted to be invited, he said, “I had my Bar Mitzvah the day the war broke out. We still went to shul but we didn’t have the party. I’ve really enjoyed today, it’s been really special.”

Another resident, Sandra Cowan, and fellow Arsenal fan, who Mikey met on previous visits to the home said the afternoon was “Wonderful,” and that she was “delighted to celebrate with Mikey”. Resident, Fay Wayman, summed up the day, saying, “There should always be Simcha’s (celebrations). It couldn’t have been nicer and I wish them Mazel (luck) always.”