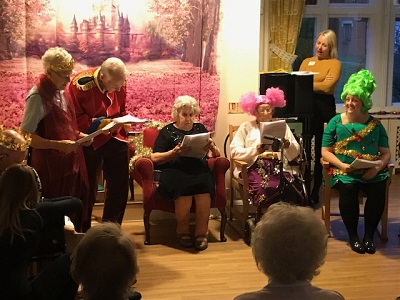 The tradition of Pantomime aka ‘panto’ is a type of musical comedy stage production designed for family entertainment, performed especially during the Christmas and New Year season.

Preparations began in October to share the idea and research the scripts; then it was time to start rehearsals in November.

The popular and loved Cinderella story included the plot of a lowly figure who lives with her stepmother and her two stepsisters, Anastasia and Drizella. Cinderella is made to clean, sew and cook all day long until her Godmother comes along to wave her magic wand and change life for the better.

The script for the well-known tale was adapted and written by Jo Gadd, the Activities Coordinator.

Jo also played the role of the Wicked Step Mother. She said; “We have sourced props and a backdrop to help us set the scene.
“The residents have been really excited to rehearse.
“They are always asking when they can practice, and they often arrive early to prepare for their scenes.
“The recent dress rehearsal was a lot of fun with plenty of adlibbing and laughter!

Attendees were invited to pay for tickets to watch the fun filled panto, with all proceeds donated to The Care Workers Charity.

Registered Manager Lisa Sellens was in charge of sound effects and music on the day:
“We thought it would be a great idea to create our own version of the classic Panto, Cinderella this year!
“Some of our residents have been involved in drama before, while some of them have discovered a new skill when it comes to acting and they have come out of their shell.
“Dressing up in bright costumes and performing to the audience of friends and family is going to be a real highlight for them and everyone is ready to shout the famous words: he’s behind you”

The Care Home goes to great lengths to make a positive difference to the lives of residents.

Recently the organised events have included;

Their own version of the Great British Bake-Off Final inspired a group of passionate bakers to create their own ‘Bake Off’, cake competition. 11 sweet and savoury delights were entered by the residents, staff and relatives who live at the Woodlands Road residential home, including–including carrot cake and a quiche.

An exciting Halloween party with a spooky supper took place recently and on another occasion two Alpacas called ‘Midnight Prince’ and Casper visited the care home.

The ‘Knitter Knatter’ weekly club created knitted hats for the neonatal department at the Princess Anne Hospital in Southampton this summer. The fun-loving care team decided to organise a trip to the Watercress Line Railway, for Richard, a railway enthusiast who enjoyed the visit to see the steam trains.