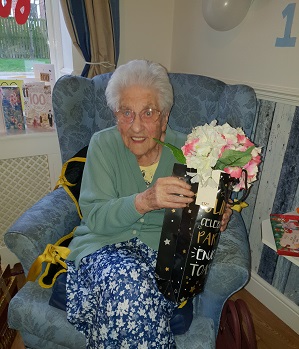 A BARNSLEY care home resident has celebrated her 100th birthday with family and friends.

Irene Bates, who was born two months after the end of the First World War, marked her centenary at Deangate Care Home, on Towngate, Mapplewell.

She was joined by fellow residents, staff, family and friends as she opened her card from the Queen and telegram from the Houses of Parliament.

Irene was born in Royston and has lived in Barnsley her entire life – except during the Second World War.

She moved to Huddersfield during the conflict, to work for Avro, making parts for Lancaster Bombers.

Dawn Paley, home manager at Deangate Care Home, said: “We were delighted to celebrate Irene’s centenary with her friends and family.

“She had a lovely day and everyone enjoyed the party.”