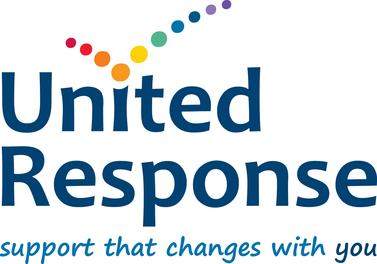 Robin Cooper, 41, singlehandedly raised the funds for United Response over the last year, which has a service based on Sudley Road in the seaside resort.

United Response’s ‘House 48’ service is a mental health resource centre for people who have or have had mental health problems to maintain or recover independence in their lives. It offers activities such as art and walking groups, community inclusion and advice.

Robin is himself supported by the charity after being diagnosed with psychotic depression when he was 17 and later with treatment-resistant schizophrenia.

The funds he has raised will help to pay for a three-course Christmas meal for 32 people including support workers and those supported by United Response who have mental health issues and who may otherwise spend the festive season alone.

“I would be at a real loose end if I didn’t have this support from United Response,” said Robin.

“I get to come here [to Sudley Road] and hang out with people. It really helps me to engage in the community and meet new people. It feels great to raise money for a Christmas dinner.”

He single-handedly raised all the money by busking on the streets of Bognor Regis – playing hits from bands and artists such as Pink Floyd, The Eagles, Ben E King, Nirvana and Bob Marley.

‘House 48’ Service Manager Ruth Davies said: “For many people, Christmas is a happy time of the year but we know for people with mental health issues, it can often be a difficult time with some struggling alone.

“So we’re incredibly grateful to Robin for his generous donation which will help to bring people together and will no doubt help to brighten up the lives of people we support here in Bognor Regis.”

Robin has been supported by United Response since 2004 and said at his lowest, he was overwhelmed with feelings of emptiness, paranoia and being “lost in the wilderness”.

“It’s so much easier to struggle away from home,” he explains.

“I feel more relaxed here [at House 48] – I don’t need to worry about my behaviour so much. The staff here have helped me with lots of things over the years. If I didn’t have this place, I don’t know what else I’d do.”

Any leftover money from the meal will be put towards replacing the service’s communal piano with a brand new keyboard.

Robin said: “Music is something I enjoy and coming to United Response gives me opportunity to help other people with problems similar to mine.

“Also organising the meal is a way of getting us all together to say ‘Look, we survived another year’. Without this place, I’d be lost.”
United Response is a top 100 national charity that provides person-centred support to around 3,000 adults and young people with autism, learning disabilities, mental health needs or physical disabilities – including some of the most vulnerable people in the UK.
To learn more about United Response, visit www.unitedresponse.org.uk.