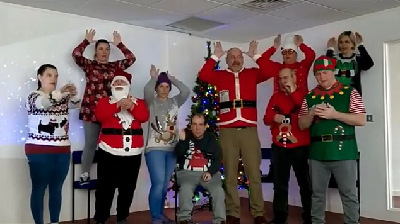 A Shrewsbury-based choir whose performances focus on signing rather than singing is sharing the spirit of the season with their recording of Christmas Alphabet.

The fun festive video, which can be viewed below is December’s most popular feature on the home page of care-provider Regard’s website and is also spreading seasonal joy in the guise of Regard’s Christmas e-card.

Musical director Kim Walshaw said: “What makes our choir so special is its inclusivity, with people of all abilities singing and signing, all of them either supported by or working for the Regard Group.”

Regard is the UK’s third largest private provider of residential and supported living care for people with learning disabilities, mental health needs and acquired brain injuries.

The ten-strong choir, all dressed up in Christmas jumpers and a variety of other festive outfits deliver the song with great enthusiasm and are clearly thoroughly enjoying their performance.

The ‘signing choir’ was launched nearly two years ago for colleagues and the people they support by Kim Walshaw, who is both a qualified Makaton trainer and a locality manager for Regard.

Kim said: “The choir is so excited to be the face of Christmas for Regard this year. The film is sent with ‘Season’s greetings from Conrad, Matthew, Amy, Mark, Lance and the rest of our Makaton Choir… and everyone else at the Regard Group.’

“Christmas wouldn’t be Christmas without some communal singing after all, and we’re about having fun all year long, so we think we’re great ambassadors.

“What’s amazing about combining signing with singing is how empowering it is. The signing allows people to express their personalities and show others how we feel – all with our hands. It’s such a rewarding experience.”

Makaton is a language programme that uses signs and symbols to help people communicate. It is designed to support spoken language, so the signs and symbols are always accompanied by the spoken (or sung) words and not used as replacements.

‘Christmas Alphabet’ was the first UK Christmas chart topper that was actually about Christmas. Performed by popular fifties’ crooner Dickie Valentine, the song entered the UK charts on 25 November 1955, and was there for seven weeks, including three weeks at number one.