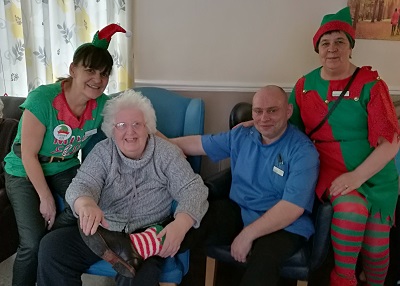 ELVES were running around a Tyneside care home spreading Christmas cheer and raising funds for the fight against dementia.

Staff and residents’ family members all dressed as Santa’s helpers for the day.

The residents enjoyed watching Elf, among other Christmas movies, singing carols, playing a Name The Elf game and tucking into a selection of cakes.

The home raised £54 for the Alzheimer’s Society, with the funds going towards supporting those with dementia.

Resident Pat Greig said: “I love the outfits the staff members are wearing. It makes the home look like Christmas already.”

Christine Chandler, activities coordinator at Willowdene Care Home, said: “Christmas is all about giving and it’s great that everyone wanted to support the Alzheimer’s Society on Elf Day.

“We all had such a laugh and raised a brilliant amount for a charity very close to the hearts of everyone at Willowdene Care Home.”