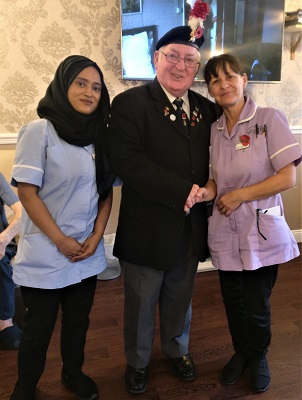 A SENIOR member of the Royal British Legion visited a Tyneside care home to talk with veterans on Remembrance Day.

Vice Chairman of the Hebburn branch of the Royal British Legion, John Waggott, visited Willowdene Care Home to talk with residents about their wartime experiences.

Among those was 95-year-old Jimmy Mahoney, a Second World War Merchant Navy veteran who joined up at 14 as a cabin boy.

Residents at the home, in Hebburn, near Newcastle, also attended the St John’s Church Armistice Day service, before watching a parade through the town. 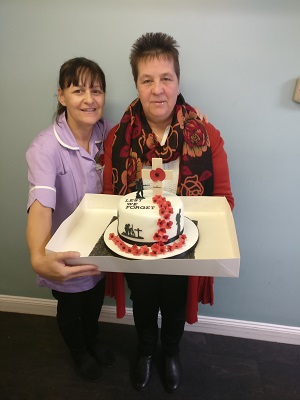 Cadets, police, fire service and civic officials were among those marching through Carr Ellison Park and laying wreaths at the cenotaph.

Resident Patricia Greig said: “I’ve never been to such an emotional event.”

After the parade, the residents were taken back to the care home, on Victoria Road West, to enjoy a slice of homemade Remembrance Day cake.

The home’s activities coordinator Amanda Rowden baked and decorated the cake with edible silhouetted soldiers, poppies and a cross.

Fellow activities coordinator Christine Chandler said: “I was so proud that our residents wanted to attend 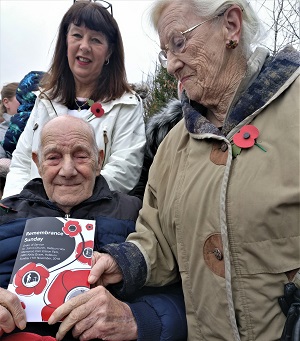 the service and parade.

“It showed the community’s respect for the men who died during the war.

“When we walked back to Willowdene Care Home, we were followed by the band, and we all sang along to ‘Pack Up Your Troubles in Your Old Kit Bag’.

“And then the residents got to enjoy a piece of the fabulous cake baked by our own expert baker Amanda.

“It was a lovely day and a fitting tribute to the amazing men and women who served our country during the wars.”