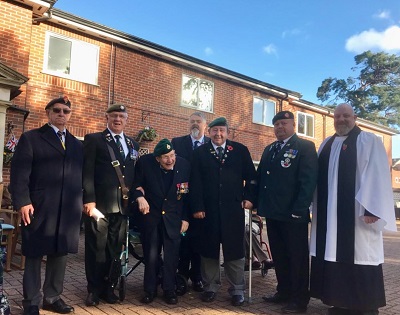 The service was held in the grounds of Burlington Hall and many of the staff and residents braved the fresh November air to participate in a moving commemoration. A poppy display which had been created by residents alongside the children of Fullbrook School, was proudly displayed in the front grounds.

Sianne Murray, the Activities Manager at Burlington Hall, said “we feel it is important for communities to come together, to recognise and honour our war heroes, both past and present. The service meant a lot to our residents and we are working closely with the Royal British Legion to plan next year’s service.”

The guest of honour was Mr Ronald Perry MBE, an ex Royal Marine and resident at Burlington Hall, who laid a wreath as a mark of respect.

The Royal British Legion has offered to donate a war memorial for Burlington Hall and to visit the ex-servicemen residents to offer company and support.

Adara Healthcare’s Director, Sue Hanspaul, commented “we are very grateful for all the support which the Royal British Legion provides to Burlington Hall. We have had a number of ex military personnel stay at the home and it is always a pleasure to witness the friendship and camaraderie which exists amongst them”.