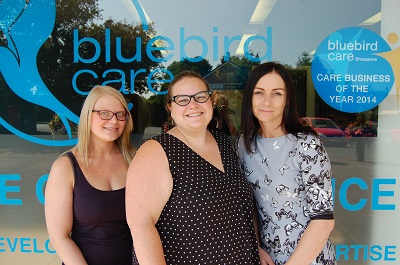 An award-winning Shropshire Care company, which developed its own career trajectory for staff, is staying true to its word and has recently promoted several team members in-house.

The Shrewsbury-based care company, which provides at-home care to allow people to remain living independently in their homes and avoid hospital and nursing/care homes in Shrewsbury, Church Stretton, Oswestry and the surrounding areas, is passionate about promoting from within and helping its staff discover their true potential – whether it’s as a carer or into management.

Sarah Ford, from Oswestry, who started as an administration assistant in the company’s Oswestry team a year ago has recently been promoted to the role of Supervisor. Her new role will see her supervising carers and giving support to customers in Oswestry and the surrounding areas to make sure staff and customers are well looked after and standards are maintained at a high level for inspections and reviews.

Sarah said: “I enjoyed working for the company from day one and my role as an admin assistant saw me getting to know the staff, systems and the way the company works. I knew that the company had an ethos to promote from within so I thought with hard work and the right attitude I would be able to progress. When I was offered the promotion to supervisor I was really thrilled as it is more responsibility. I am really looking forward to starting in the position later this month.

Claire Flavell, Director of Care, said: “Sarah has quickly established herself as a very valuable member of the team and an asset to the company. She demonstrated ambition and willingness to progress up the ranks, so we are happy we have been able to support her to do just that. She only joined us a year ago but has proven herself so much in that time. As a company we are keen to support anyone who wants to progress, which is why we created our career path a few years ago.

“All our staff are shown the career path when the join us and shown how if they work hard there are lots of opportunities to progression within the company.”

Other recent promotions include Kirsty Holland who started as a part-time carer with the company seven years ago and progressed to the roles of supervisor and care manager and after recently returning from maternity leave, she has been promoted yet again to Specialist Care Co-ordinator, which will see her heading up the company’s latest venture, providing local, live in care, county-wide.

Daryl Ashton, who started as a supervisor in 2016 was promoted to Care Certificate Supervisor on her return from maternity leave in February 2018 with the additional element of GDPR Compliance Officer being added to her role.

Claire added: “All companies are having to navigate their way through the GDPR changes which came into effect in May. But for a company such as ours, where we hold really sensitive date on customers and staff, it is extra important that we comply and ensure that all of our data is stored really safely and used in the most confidential manner. Daryl has been made our HR Support on this specialist project and we are implementing procedures and protocols to adhere with the new rules.”